The Golden Hour by Margaret Wuertele 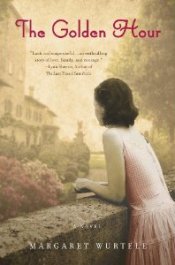 Giovanna Bellini is a very young 17 year old at the opening of this story occurring in 1944 Tuscany, Italy. The Germans have taken over Italy and confiscated the bottom floor of the Bellini home as residence for German soldiers. Giovanni really hasn't absorbed the horrors that the Nazis have perpetrated across Europe and are continuing to do so in her native land. But she is unfortunately about to learn, the hard way!

First, she falls into an infatuation love affair with a German soldier and stops just short of sleeping with him when she is caught by the nuns who have taught her up to now. Then her role in the war truly begins when her partisan brother, Giorgio, talks her into collecting food and supplies for him and his colleagues secretly working against the Nazis. Her relationship with her parents begins to erode because they continue to treat her like the child she has always been.

Giovanni's real taste of war begins on encountering wounded Italian soldiers, including a Jewish Italian soldier with whom she truly falls in love. She must steal and lie to complete her mission of healing and helping, learning whom she can trust to help her project and whom she must avoid. Despite one event in which her former German love mercifully lets her go after realizing who she is hiding and why, Giovanna learns of the treatment of the Jews. Her break with her parents widens on her 18th birthday in which she confronts her father with his former role in supporting the Fascists and their treatment of Jewish businessmen, as well as his unrelenting attitude to her new love and commitment to marry that man.

The Golden Hour is a page turner one won't soon forget. While Giovanna appears to be quite naive for a 17 year old, one can understand her unintelligent mistakes in the vein of being a sheltered child whose parents live in an elite world that is gone forever! She grows up quickly, becoming a courageous, compassionate person who contributes much to the war effort. Finely told, Ms. Wuertele!
Posted by Viviane Crystal at 11:29 AM