Songs of Three Islands: A Memoir by Millicent Monks 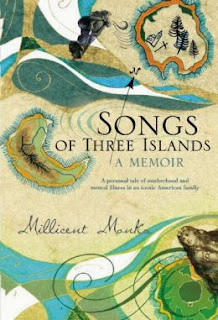 Three islands provided homes for generations of the Carnegie family: Cumberland Island off the coast of Florida, Crescent Island near Maine, and the North Island near the Canadian border.  These islands also serve as the metaphors and symbols of the singular world of madness plaguing the women in this notable family.  The islands hold myriad nightmarish voices emerging from the unconscious and merging with the so often harsh reality of the consciousness of these family members.  Millicent Monk wrote this memoir to bring this world to light, to remove the stigma of mental illness, to be a guide for those who have no access to mental health in their illness or for their families.  To discover that what one feels, thinks, says and does that is so irrational and creates such indescribable havoc in families is life-giving in a way that will be pure salvation for those who read this painful, poignant but incredibly important account.

Millicent Monks first offers the world of her mother, Lucy Carnegie, a woman who seemed to slowly go mad. Yes, she heard voices and believed fanatically in germs destroying her children, but she was also the victim of harsh verbal and even physical abuse from her husband who appeared convivial and charming to everyone else.  The reader is not sure which is worse, watching the descent of Lucy into madness to the point where she has to be committed to a hospital or the way the author tries to cope with it, turning off every thought and feeling, knowing that if she thinks or feels too much about it all she will surely go mad herself. But such a solution isn’t a cure at all but only a different road into the world of mental illness that increases with time; underneath the total lack of feeling is indescribable hurt and anger that cannot help but leak out initially and then more forcefully later on. As she puts it so well, “What could be crueler, to live on this earth and not be able to feel loved or love oneself?” Fortunately, Millicent Monks has experienced her own precious years of difficult but healing therapy.

The author also recounts the crises experienced with her own battle with cancer and her daughter’s borderline personality disorder.  It sounds so simple to name a disease but it is very practical the way Ms. Monks describes learning to care and let go or not care at the same time in order not to be consumed by this major problem.

To say more would be to spoil a very special read, a memoir of beautiful descriptions of the islands juxtaposed with the miasma of mental disease threatening to leash its “murderous rage” upon any and all.  What is more important is that this memoir is not just a litany of suffering but a tribute to the strength required and manifested by family members, including the author’s loving husband Bobby, doctors, and other mental health practitioners, as well as friends and other family members.  In a world that often spends far too much time lamenting disasters resulting from mental illness in the news, here is a book of hope, a plea to identify and help those in need of treatment and love before any looming crises emerge.  Wonderful memoir worthy of its brave, sensitive and uniquely special author! Highly recommended!
Posted by Viviane Crystal at 5:49 PM No comments: 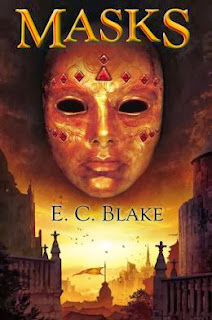 Enter the Autarch, the Supreme Ruler of Aygrima, who in the first few pages uses magic to destroy a female opponent.  But destroying his enemies is not the ultimate goal; it is the goal from the moment opposition rears its rebellious head.  So how easy in this high tech, future society to create a specific mask for each man, woman and child, one that a “Watcher” can look at and immediately detect disloyalty or at least suspicion of betrayal.

And so it continues. We now enter the home of Mara Holdfast, daughter of the Master Maskmaker.  Mara has worked with her father and been allowed to learn the basic skills of fashioning each mask but will not be allowed to learn the Magic behind each mask until her own masking ceremony.  She is very excited about it until she sees a definitely suspicious pattern in her father and mother as her ceremony date on her birthday approaches. She knows that she has lied when tested for her ability to be one who has the “gift” of magic, a terrible crime that could be the undoing of her and her family. Add to that the foreshadowing when she visits the area near the town’s gates where criminals are crucified.  It’s not specifically defined why they are killed but every citizen knows it has to do with being a rebel or criminal against the all-powerful Autarch!
Be shocked on the long-awaited day when her masking ceremony turns into a total disaster; and but for a woman with the gift of healing Mara would be horrifically scarred for life.  Instead she is healed and taken away by the Watchers, first to a prison and then to those who will transport her to a mining camp for prisoners.  But her arrival there is forestalled by rescuers who have captured her for their own purposes.
The goal is to stop the Autarch from continuing his Mask policy, as the latest, more-developed Masks are changing people’s personalities after they are masked, producing robotic, trance-like people who would never be able to even think about the possibility of rebelling.  There are many heroes within this story who will do all they can to ensure that the reign of Autarch is destroyed as soon as possible. The scenes are tense, life and death struggles all too frequently, and sometimes one isn’t quite sure who are more evil, the Autarch or his Watchers and guards.  There are children being used for the Autarch’s final solution to the Masks, with devastating consequences that leave any reader with half a heart furious!

Masks seems to be the first of a series to come and is well-written science or paranormal fiction.  It’s credible, exciting, complex and mysterious enough to keep the reader avidly flipping the pages!  Great writing, E. C. Blake – highly recommended sci-fi fiction!

Posted by Viviane Crystal at 5:41 PM No comments: 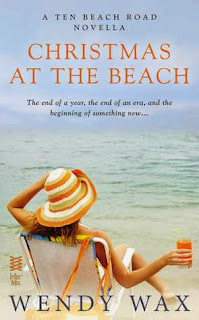 One year ago a group of family, friends and acquaintances joined together to renovate an old historical beach house, Bella Flora.  Madeline Singer, Avery Lawford, and Nicole Grant agreed to a reality-style filming of their efforts, showing their marvelous talents and skills in full force as they took a broken down, almost ready to be demolished home into its full beauty and strengths as a model historical home worthy of its old but gorgeous Florida beach house status.  That process wasn’t pretty all the time and betrayals and secrets almost destroyed them each emotionally, as well as financially.  Secrets galore threatened as well and here we are a year later in actual and fictional time gradually learning there are still more shocking secrets to shatter the serene Christmas atmosphere.  But first there are celebrations for Christmas Eve and Christmas Day to be held, with eating, drinking and chatting as the original characters and other relatives gather for their last holiday at Bella Flora.

Kyra, Madeleine’s daughter, is first surrounded by the paparazzi at the airport and in a funny scene escapes their voracious quest for just one picture, and another, and another.  It’s not very long after her arrival at the beachfront mansion that a huge, absolutely huge gift arrives from the father of her son, Daniel Deranian, who is already married, with the most horrific virago of a wife one could ever imagine.

Add to that the awareness dawning on Kyra that all is not well between her parents and a later discovery on who has finally bought the redone beauty, Bella Flora, and you begin to get the picture that this is a family that seems to be defined by constant “drama” although not everyone takes it that way.

Still, they find time each evening to have a celebratory drink and offering of what’s good in their worlds which is heartwarming at times and simply lovely at others.
It also turns out that they will begin a new renovation next year somewhere in the Florida Keys, The House on Mermaid Point – something to definitely look forward to reading and sharing!

Christmas at the Beach is a lovely story about a typical yet unique family gathering together to share, bicker, love and heal – like most families wind up doing at holiday time!  Great Read!!!
Posted by Viviane Crystal at 5:23 PM No comments: