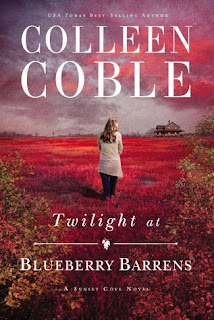 Kate Mason is feeling stronger now, since she completed her chemotherapy and had a stem cell transplant for aplastic anemia and she and her sister are reunited.  She’s loving the fact that she’s back at her favorite spot in the world, a remote farm in Maine.  Even though it’s been a bad year for the blueberries, she and her sister Claire have put their thinking caps on and decided that Kate will renovate a small cottage on the farm and rent it out for the rest of the summer.  Claire is about to get married and Kate hopes that union won’t separate she and her sister again!  The rest of her family is in jail or nowhere near to comfort and support Kate who desperately needs some stability at this pivotal period of her life.

That piece is shattered when while looking through binoculars at a group of birds nesting nearby she sees the bodies of a man and woman at the bottom of a cliff.  In very little time, the police seem to write it off as a murder and suicide, in spite of the fact they have little evidence other than the bodies to substantiate that claim.

The activity ramps up when Derek Carter arrives in the area with his two daughters. Outside of an elderly but spunky aunt nearby, Derek isn’t stating why he’s spending the summer here.  He’s got his handful with these two girls as they are deeply hurting over the recent death of their parents. Derek and Kate meet and she agrees to rent him the cottage and a few days later accepts his offer of a summer job as a Nanny.  From this point, the action swings into a fast-paced plot.

Kate learns that it was Derek’s brother and sister-in-law who were found dead but Derek believes they were murdered and that it is related to a deal related to a sale of drones.  Kate’s home is broken into and she senses she is being watched but doesn’t know by whom.  Here we also learn that her Uncle is out of jail and she believes him to be in the area after her.  It’s at this point that one realizes reading the earlier novels in this series might result in less confusion about the way all of these threads connected to Derek and Kate cross each other, often creating confusion in the mind of the reader.

Eventually, each thread is solved after some theorizing and alert watching.  While the mystery and its outcome is worth the reading, the end is rather anticlimactic with Claire dropping an unexpected bomb on Derek and Claire who by this time know they want to be together permanently.  All in all, Twilight at Blueberry Barrens is a plot-driven mystery thriller that engages the reader’s attention and doesn’t let go.  Nicely done, Colleen Coble. This reviewer is wondering where this series will go next and looking forward to it.

The Empress of Tempera by Alex Dolan 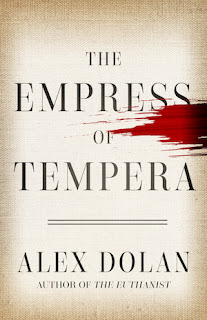 Katie Novis legally changes her name to Paire Anjou because her family’s name is notorious for a horrible criminal event.  She’s very artistic and bohemian in taste and thinks her life in New York as a new artist is bound to be new and refreshingly clean of nefarious doings.  Her life with her boyfriend Derek Rosewood is exciting as he is a graffiti-guerrilla style artist who wants to both shock viewers and awaken them to social consciousness about troubling issues.  There’s an element of crime in the way he places his paintings but nothing that causes harm to anyone.  That’s all about to change for this young, vibrant couple.

Paire is unfortunate enough to observe a man staring into a storefront window of Fern Gallery.  She is entranced when looking at the painting the man is staring at so intensely he doesn’t even notice her presence.  But all of a sudden, before she can do anything about it, this man quickly dies.  The turmoil that follows is almost sidelined by shock and Paire’s realization that this painting is so intense as to enchant the viewer to obsessive looking.

This is the story then of “The Empress Xiao Zhe Yi, Seated” by a Chinese artist Qi.  It turns out this is the one remaining painting from his entire life that is being shown for the first time.  The woman in the painting actually is supposed to represent a real woman, but the reader will discover her real story, a tale of bribery, greed and obsession that pulls in a financier, a gallery owner and his lover, Paire and Derek, and the artist’s sculptor daughter.

Although the characters are rather stereotypical, the reactions of viewers to this painting are both exaggerated and yet mesmerizing in their intensity.  One wonders how viewers could faint or become so enamored of this woman that it elicits their most lustful feelings?  Deny it but admit it’s temporarily mesmerizing!  One wonders if this is how some viewers saw “The Mona Lisa” when it was first displayed to the public?

The plot will progress to attempts of theft and the effects will be disastrous for several characters.  Paire discovers that she is not so different from her family, a background that is also gradually revealed, and that her lover’s innocent acts shock even him into realizing how art reflects life’s most noble but also baser passionate aspects.

The Empress of Tempera is a great read that will move a large, wide audience and rightfully so!  Nicely crafted, Alex Dolan!

Posted by Viviane Crystal at 2:16 PM No comments: