A Study in Scarlet Woman: First in the Lady Sherlock Series by Sherry Thomas 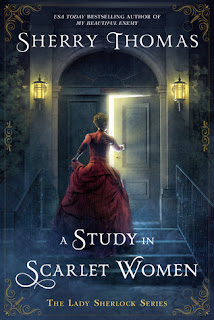 Charlotte Holmes is a very bright woman who is highly observant of minuscule details that escape the normal person.  She’s determined not to marry and just wants to get some education and become head of a school. That just doesn’t fit in with her Victorian world but she couldn’t care less.  When her father changes his mind and denies her the dream of a future, she causes a scandal and runs away.  Surprisingly, she hasn’t realized her dire situation, even though she thinks about what it means, until she’s almost out of money and can’t get a job because of her scandalous reputation that has quickly spread around London.  Meanwhile, three deaths occur close to her home and her sister and family are blamed, bringing complete ostracism from society.  Charlotte is determined to get to the bottom of the deaths!

Eventually Charlotte, her friend Lord Ingram and Inspector Robert Treadles, take her advice, supposedly given by the “real” Sherlock Holmes, a step at a time and the reader will be shocked at the eventual outcome.  Meanwhile, a new friend who has reached out to Charlotte suggests she advertise her skills of “discernment” and make that her career to earn the money she needs.  Lo and behold, she is stunned by the number of requests she receives, and her sharp-mindedness and intuitive sense guide many a riddle or crime into satisfactory solutions.

What is quite interesting is that solving the death of the three supposedly unrelated characters turns out to be not only clever but a bit anticlimactic.  What keeps the story moving is a budding romance between Charlotte and Lord Ingram, the latter of whom has a few secrets of his own associated with “watching over” Charlotte.  This very much fits in the with the noble Victorian mores of never allowing a woman to be left alone in danger but introduces a few hints of Charlotte missing the boat and thus introducing a wee lack of credibility on her part.

Charlotte is an enigmatic character indeed!  On the one hand, she’s definitely got the “Sherlock” clues in hand; yet she can be incredibly naïve about her own circumstances.  Certainly she has a prodigious appetite which she guides only by observing whether she’s coming close to a double chin or more.  One senses that other appetites will develop now that she and Lord Ingram may, should fortune favor them so, become closer. However, that’s a problem that will have to await another novel in the series.

All in all, A Study in Scarlet Women… is a good read that will please may fans of mystery fiction.

Posted by Viviane Crystal at 5:21 PM No comments:

The Gifts of Man by S. M. McElligott 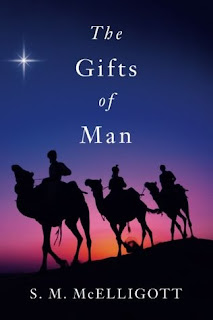 We must follow the star! Melchior, Gaspar and Balthazar, known as the three wise men of Biblical fame, received individual messages in their dreams that added to the astrological knowledge.  They came from areas of the Middle East where following Judaism was more of a liability than a blessing.  The Empire of Partha and a war-torn area of what is now Yemen were places where kings vied with each other for power but were helpless against the power of King Herod, himself supported by Roman domination.

The author imagines the lives of these three men in their day-to-day existence.  One finally gets the approval he needs from his King to be an ambassador to find this new “King” only after a plague decimates his city and Gaspar survives that same disease.  One acquires a female traveling companion who entire family has been murdered by marauding bandits common throughout the Middle East.  They find intense hate, suspicion and love during their long journey.  A visit to King Herod to tell him of their great news produces an ambiguous response but the flattery that follows is the precursor to dire warnings.

So many lush and sparse descriptions follow of traveling through cities and deserts that the reader is drawn into thinking and feeling part of their journey.  The climax of this journey, not surprisingly, is when they finally meet the newborn child whom they all believe is to be the Messiah.  Their gifts of frankincense, myrrh and gold, while the most precious of offerings, seem minor beside their joy at seeing and holding this blessed babe. Gaspar receives an unexpected but life-saving healing from being in the presence of the long-awaited Savior by Jews throughout the world.  Differences are ironed out and marriages follow. Later on after they have returned to their native land, they hear of the life of Jesus, the Messiah, from Thomas, one of the famous apostles.  The three wise men, however, know that their lives were totally transformed by their journey and their brief meeting with the true gift to man.

This novel is obviously very well-researched and beautifully crafted, so much so that this reviewer was sorry when it ended.  A glossary and maps are added to enhance the reader’s experience. Ms. McElligott is a very talented writer whose novel will be a gift to those who read it.  Highly recommended historical and Biblical historical fiction!

Posted by Viviane Crystal at 6:16 PM No comments: 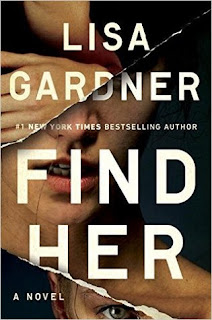 Harrowing! That will be the outstanding descriptive word that remains in the reader’s mind long after reading this ordeal that lasted 492 days for one kidnapped woman!  The story begins from the narrative voice of an unnamed person who is locked in a coffin, who struggles to find a point of escape, whose panic threatens an attack cutting off breath, and on…and on…and on.

Pages later we learn the victim’s name is Flora.  She has survived!  Now the account switches back and forth between what precisely Flora endured and her passionate interest in other woman who have experienced similar situations.  In fact, her entire room is wallpapered with news accounts of kidnapping, rape and murdered woman.

Flora’s family fear what she has become.  Even the one man she trusts, Samuel Keans who is a specialist in survivors of extensive abuse, is watching and listening carefully as he wonders if she has become a vigilante against all who commit these type of crimes or if there’s another secret agenda Flora is following.

Detective D. D. Warren is now investigating a case where a woman turns on her abuser and he succumbs after a gruesome attack. When the police arrive, the woman is more concerned about other victims and seems to know the psychological profile of both abuser and victim better than the detective does.  At the same time, she goes out to bars, drinks too much, and puts herself in a position where any unsavory character spots and targets her.

Now Flora disappears and we learn her mission.  Given Flora’s scarred mental and emotional condition, which we have from her in-depth description of far too many of those days she was captive, we know something awful is about to happen.

In recent years, news media have covered stories of victims who were kidnapped and abused, but this is the first time we have access to a well-researched, factually connected account of what it’s like to be a victim in this situation.  So this is not only a horrific story but it’s even more engaging because we learn how connected to reality it really is.  It’s hard to imagine such monstrous events but Lisa Gardner does a superb job in depicting same in daily, torturing detail.  It’s a necessary tale that must be told!

Posted by Viviane Crystal at 10:54 AM No comments: