The Strangler Vine: A Novel by M. J. Carter 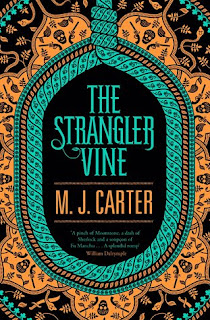 India in 1837 is a very frightening place.  William Avery is an intelligent person but uses his brains to gamble and drink too much. The result?  He’s seriously in debt and in no position to turn down any command he is ordered to obey in his position as a soldier working for the East India Company.  The natives are dependent on the British for jobs but it is very clear they are not bonding very well.  Avery’s possessions are gradually being stolen and his friend Frank who seems so calm, collected and focused is about to experience a disaster.  Avery cannot believe what he hears about Frank later on because Frank seemed so perfect.

The writings of Xavier Mountstuart on India had so entranced Avery that he decided to serve in India but the writings and the reality don’t quite match.  Now Mountstuart seems to have gone “native,” meaning he’s living like an Indian and causing trouble wherever he appears.  It’s Avery’s job to serve Jeremiah Blake, who is a secret political agent supposedly retired, in their quest to find Mountstuart.  India is described on this journey in all of its ugliness and enchanting beauty.  The weather is described as fairly intolerable as it’s excruciatingly hot and rainy since it’s the monsoon season.  I couldn’t help thinking I was reading descriptions that vie Joseph Conrad’s writing – that dark, mysterious atmosphere that seems to pass from dangerous, life-threatening trails to momentary periods of relative safety but in which one cannot relax for fear of the unknown suddenly appearing to end life.

The characters are mysterious as well.  Jeremiah has gone native in more ways than one as he knows the terrain through which they travel and after some definitely antagonistic skirmishes with Avery he actually comes to like Avery.  For Avery is really not stupid but more like a bumbling fool, who seems to get into every possible danger on the trip up north.  Avery finally learns to let go of his “British arrogance” stance with Jeremiah and trust him.  They gradually become friends.

Readers will meet a group of natives called Thugs who kill for ritual sacrifice purposes. We are told they will not kill any British person because they are an unworthy and disgusting bunch and not worthy of their sacred rites.  Who are they really and are they a threat to Avery and Jeremiah?  The reader will not be able to put this down because it’s so riveting in unique ways.

M. J. Carter is a master writer who knows how to populate a story with unusual characters, an unpredictable fierce plot, and enough indirect and ironic satire to condemn the entire East India Company although the reader isn’t sure about that until well into the complex plot.

Fine, fine novel that is highly recommended historical fiction!  It would make quite a unique movie!

Posted by Viviane Crystal at 5:23 PM No comments:

The Fixer: A Novel by Joseph Finder 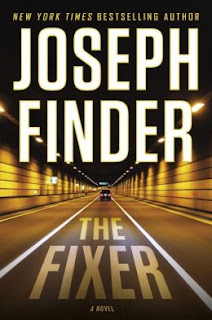 Rick Hoffman started out as a sharp guy with a great investigative reporter job, a great fiance and plenty of money linked to his job.  It bought him access to search out crime and scandal wherever it existed.  But now his fortune is in reverse mode with no job, no fiance and no money, just a dilapidated home sorely in need of a makeover in order to be sold.  His Dad was a lawyer who is now a resident in a nursing home as a result of a massive stroke that pretty much ended not only his job but any way to communicate with Rick, or anyone else for that matter.

So Rick is out of money and the owner of several maxed out credit cards. Hardly a paragon of success!  However, while talking about renovations with his neighbor, they are wrecking an upstairs wall and come upon a stack of packages.  Rick has discovered way over a million dollars of cash.  He thinks his neighbor has seen him trying to hide it but isn’t sure.  So the story really begins with several problems.  Where is he to hide all this money?  Where did all this money come from?

All of Rick’s sleuth skills are now in play.  Talking to people who knew his father’s work life and connections, he quickly discovers his Dad was what is known as a “bag man.” For those not into the criminal world, that’s a person who pays off certain public and privately important people to get “the job” done, usually an illegal or secret job that must never be exposed to public scrutiny.

The tension mounts as it’s clear the owner or owners of that money know Rick’s got the money and are going to do anything to get it back. That includes some very violent scenes that up the tension-riddled moments and Rick barely escapes up to a point.

The Fixer is connected to a scandal once known as Boston’s “Big Dig” project.  Payoffs aren’t news to most alert consumers and citizens in contemporary times.  What is never business as usual concerns the extent to which some important or powerful people will go to make sure that payoff plans become finished business.  It’s up to Rick to finish the job!

Fairly simple plot but plenty of action  plus a little bit of sexy romance for those that love criminal fiction!

Posted by Viviane Crystal at 5:11 PM No comments: