Daughters of Fire by Tom Peek 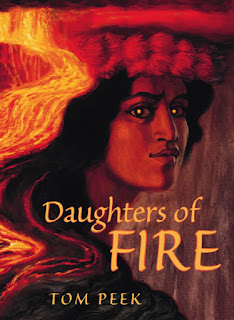 Contemporary Hawaii has been taken over by politicians and businessmen seeking profit at any cost.  Native Hawaiians have been marginalized and cast aside, sometimes by omission or ignoring and sometimes by commission of violent crimes. But there is a magic, mysticism, and beauty of this state that elicits wonder, awe, and passionate defense.  Maile is a such a Hawaiian, an educated anthropologist who keeps in touch with everything going on. She quietly notes and at times assists those native Hawaiians who will demonstrate and do whatever they can to keep their land pure and true to its spiritual identity and destiny!

So the reader watches with fascination as she meets a non-Hawaiian white Australian astronomer doing research.  He is at first a detached observer here for his scientific exploratory job but slowly is entranced with Maile and with her land.  His initial attitude is representative of those who live for a material world and are blind to the awesome ambience of this gorgeous island.  Even the volcanic craters that have a temperament of their own, believed to indicate the support or punitive anger of the divine Pele.

Add to that a super resort is being built on what is believed to be sacred native land that was stolen from true Hawaiians. It's worth millions and its growth is supported by politicians all the way to Washington.  However, it is also built on a volcano that recently has been predicted to be slowly rising.  It poses a major financial crisis for the builders, owners, and even the Hawaiian rebels who will demonstrate to try to stop this abomination from opening.

A young man accidentally happens upon a strange murder, several Hawaiian men hurling a desperate, screaming, crying man into a volcanic crater.  On and on the violence goes, a symbol of betrayal, and a symbol of the immense power of the Hawaiian "mafia."

There is so much more in this vivid, panoramic view of so many disparate sides vying for power and ownership, all with different motives and all using acceptable and illegal means to attain their goal.

Daughters of Fire in a way takes of where Hawaii by James Michener ended.  It's an emotional, terrifying, and inspiring look at this land that has moved so many to its paradise atmosphere and possibilities.  Notable fiction!
Posted by Viviane Crystal at 6:12 AM No comments:

What Are You Looking At? by Will Gompertz 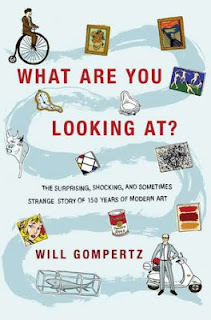 Here is a comprehensive, readable book for those ranging from art lovers who those looking at modern art and thinking, "I don't have a clue to what this is!"

Beginning with a short overview of how art as investment increases for both living and dead artists, the author begins with the story of how Marcel Duchamp rocked the art world with his "Fountain," a urinal turned upside down with some drilled holes.  The point?  What do you see?  The artist would say to keep looking and then the layers of meaning may unfold for the viewer - or - perhaps it's just a urinal which elicits a variety of responses from the viewer.  Is Gustave Courbet's "The Origin of the World" pornography or much more than its surface physicality? These flagrantly different  conceptions are comic yet also a window into the world of contemplation and artistic creation that spans 150 years, that which is called "modern art."

The text then covers multiple schools of art, beginning with pre-Impressionism and Impressionism which is much more than many viewers perceive of as "just dots" and really convey the first time artists wanted to paint outdoors, carefully watching how light and shade created beauty in nature's everyday scenes.  It also describes how the artists of this period risked so much and even started their own schools to rival the prevailing "Academy" system, speaking for the passion of creativity that they felt deserved a larger, appreciative audience.

What Are You Looking At?... is a fascinating, intelligently written, very readable look into similarities, differences, and new concepts in the modern artistic world quite frequently seen at the Museum of Modern Art as well as other museums and galleries throughout the world.  It's a must read for every person who wants to understand and appreciate great art!  Superb and highly recommended!!!

Posted by Viviane Crystal at 5:20 AM No comments:

Email ThisBlogThis!Share to TwitterShare to FacebookShare to Pinterest
Labels: art, art history, nonfiction, What Are You Looking At?, Will Gompertz 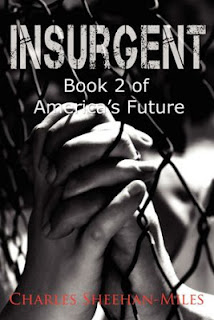 Revolution has ripped apart America, continuing the rebellion begun in Republic: A Novel of America's Future. The people have spoken and civil war devastated America's cities.

Valerie Murphy's father has been executed for his part in promoting violence and seceding from the American government.  She has been imprisoned and brutalized so much she is obviously suffering from post traumatic stress disorder.  Her friend, Al Clark, is now appointed Governor of West Virginia, a monumental job of putting basic services into action and restoring the shattered economy.  But the war isn't over!

An unknown group of warriors in West Virginia is still killing military personnel and shooting down helicopters approaching the area.  Corporal Jim Turville watches his friends die, falls in love, and tries to figure out who can be trusted in this blatantly volatile area.  The violence goes on and on and on!

While the first novel in this series gave ample build-up of the reasons leading to this American demise, Insurgent 2 has little to offer on the reasons and goals of the war.  It's as if death and destruction have been looming for far longer than this particular problem.  Personal freedoms are now forfeit and there seems no end to the madness! It is more potent because of the lack of reason or logic.  It is more devastating than the original Civil War because of the advanced firearm power available in this conflict!

Insurgent is the second of six planned novels.  This novel doesn't pose any "glory" scenes of war; it's hell and the reader should be deeply troubled about the reality that just could happen when people have had enough of poverty, lies, deception, mismanagement of the economy, and more - the same problems that are plaguing far too many people in America at this time.  The reader must decide how much this conflict resembles the random, erratic, and chilling brutality also exhibited in Iran, Afghanistan, and other hot spots throughout the Middle East.

Devastating to read, this is a necessary microscopic canvas of possible outcomes for the future of America! Potent stuff, Charles Sheehan-Miles!!!