Pull of the Yew Tree: The Chronicles of Crom Abu by Pauline Toohey 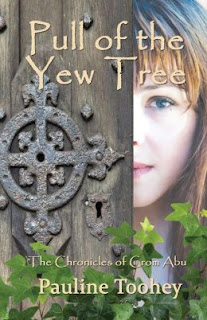 
It's the 1400s and three families or clans seem to be friends and yet highly mistrust each other: the Fitzgerald, O'Toole and O'Byrne.  They agree to stand together as the battle begins between the Yorks and the Lancastrians.

As time goes by, the truth comes out in nasty, snide remarks that show true colors of loyalty and betrayal.  But the worst will come later as the battles actually begin.  For now, they have just put down a rebellion of John Butler and his southern rebels.  Jarlath is totally devastated by the death and terrible wounds inflicted on both sides; he yearns for a day when peace will rule the Irish and England will not demand more and more loyalty in order to be left alone to live their lives in peace.

Things are about to get much worse, as Jarlath Fitgerald and Ainnir O'Byrne fall hopelessly, desperately in love.  They spend a very long time in pain because Ainnir's father has already promised her hand in marriage to Donal O'Toole, the family that raised Jarlath.

Broken hearts cannot mend when hurting so badly, and their fierce tender love is moving and sweet to the reader, albeit complicated by so much pain. Suffice to say this review isn't a spoiler but amazing circumstances will work out this problem, including more battles, more death, more anger, more harsh and passionate words, and more and more and more.

The Pull of the Yew Tree is a beautiful story filled with a mixture of real and imagined characters who lived in a volatile time testing the best of men and women.  This reviewer would have loved to be there to see it all and can't wait until the next book in this "Chronicle of Crom Abu" series arrives!!!! Wonderful historical fiction and a delightful read, Pauline Toohey - kudos to you for such fine writing!
Posted by Viviane Crystal at 5:57 PM No comments:

Email ThisBlogThis!Share to TwitterShare to FacebookShare to Pinterest
Labels: historical fiction, Pauline Toohey, Pull of the Yew Tree - The Chronicles of Crom Abu, romance fiction, War of the Roses 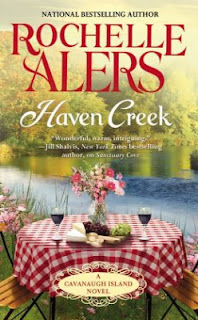 Morgan Dane is a sharp, skilled, professional architect who’s landed a job to restore historic Angels Landing Plantation.  As she left her family’s business to do this, some in the town aren’t happy with her forwardness.  But Morgan knows what she wants, that is until she meets a carpenter, Nat (Nathaniel) Shaw.  She wants to hire him to help her with the restoration project and wants to keep it purely business with no relationship problems that will spoil the business side of it. Morgan has lost a former love to another woman and was so wounded from the process that she’s got an armor-like veneer when it comes to any male talking to her outside of business. Still there’s a huge hole and need for love but will it be filled by someone worthwhile and sincere? Whether either likes it or not, ittle by little, Morgan and Nat are drawing closer, beginning with admiration for each other’s work.  Soon, they find they’re always thinking of each other, including how physically hot each one is to the other!

Nat’s got a history holding him back, being married to a celebrity with money and finding the high maintenance and partying life can’t hide the lack of love his wife really felt for him. But at the time he thought it was perfect, despite his father’s and other town people’s cautionary words.  Now he’s burnt out from it all and therefore extremely hesitant mentally toward a new romance, even though his heart and body are screaming otherwise when Morgan comes to mind or in her actual presence!

Some secrets remain to be handled one at a time. Past attitudes about former family weddings tend to put ideas in the mind that could seriously affect one’s future relationship.  But Morgan and Nat are growing because of the love they finally admit, including by the way, some ultra-hot sexy scenes they share.  Shedding the old destructive skins of the past, they will eventually decide that the future is not always a repetition of the past, as long as one understands what went wrong with that past.
Haven Creek is a lovely, warm-hearted romance sure to please those who love a happily-ever-after style ending!  Nicely done, Rochelle Alers!

Posted by Viviane Crystal at 6:11 PM No comments:

The Bookman's Tale: A Novel of Obsession by Charlie Lovett 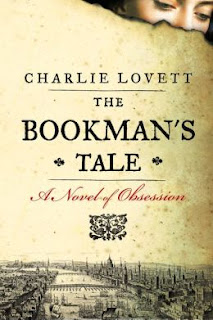 Peter Byerly is an impassioned bookseller and collector in 1995 who is living in the northern countryside of England while he mourns the death of his beloved wife, Amanda.  They were perfect together, complementing the love each had for old books about literature and art.  In fact they found each other and their career enchanting.  Now, Peter is under the advice of his physician to do certain things to recover from his grief; he has a list he must accomplish. This includes staying in touch with old friends, making new friends, and more.  But Peter was never one for all of these items in the first place, even though he has many, many acquaintances and the care of his wife’s family still.  So one day he forces himself to wander into town, the famous Hay-on-Wye, known as a book collector and book lover’s delight and that is the day his lately sedate, mundane life begins spinning into a mysterious whirlwind!

There he opens a book about whether Shakespeare’s plays were written by the master or by someone else and out falls a paper that is a perfect portrait of his Amanda.  How could this be, a watercolor that is such a perfect image of her?  This is the day Peter’s obsession begins and he must find out who this woman was and who painted this watercolor that has so deeply shocked Peter.

The novel then moves in three time periods, the first that of Shakespeare and his colleagues whom others insist might have been the true authors of the plays we read as authored by William Shakespeare.  A play called Pandosta written by Robert Greene is passed from person to person to person over hundreds of years, a wealthy artifact that just might be the answer to a riddle that has tormented many literary scholars.

It also turns out that the appearance and disappearance of this book has caused grief, rivalry, hatred, and murder between two rival families in Peter’s time.  So the plot moves back and forth through the 1600s and 1900s until the mystery is traced with twists and turns that are totally unpredictable and fascinating.  One also gets a fine, albeit surface, education about book binding and selling antiquarian books.  Whether you are a fellow bibliophile, antiquarian, romantic, mystery or historical fiction fan, this is a notable book to relish page by intricate, complex and enigmatic page.  Very literate historical fiction and highly recommended!

Posted by Viviane Crystal at 5:52 PM No comments:

And The Mountains Echoed - A Novel by Khaled Hosseini 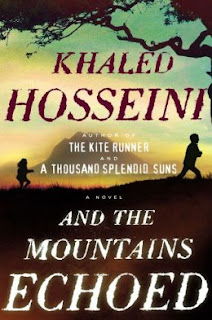 There are many kinds of poverty, financial poverty and mental/emotional poverty the most obvious herein.  What people do and become to surmount these formidable obstacles is the essence of Hosseini’s latest novel.  It is in the early 1950s in an Afghan town called Shadbagh.  Abdullah and Pari are the children of Saboor who begins this story by telling them the story of a young boy who is stolen by a djin.  Little does the boy Abdullah, who loves his father’s tales, realize that his sister Pari will be sold within the week to his step-Uncle Nabi’s employers, Mr. Wahdati and his wife Nila.  Nila is a central focus for most of this story as she is a famous poet but intensely unhappy woman.  After her husband has a stroke, she will leave him to live in Paris with Pari.  At this point, one wonders how Abdullah and Pari will ever find each other, given their phenomenal closeness before their separation.

After they leave, Nabi takes care of Mr. Wahdati, even after he discovers a secret that almost made him leave.  We then hear of another sibling story between Parwana (stepmother to Abdullah and Pari; their father’s second wife) and her sister Masooma who had a horrific accident and makes a decision that Parwana must carry out, one that frees both sisters from a life of being burdened by each other.  This aspect cuts to the soul of the reader, requiring a courage and sense of self that is true albeit more poignant than words can express.

Then we hear the story of a young boy whose father is narco wealthy, who makes his money from selling the poppy flower and who has bought the land in Shadbagh on which Abdullah and Pari grew up.  A family member inherited the property but was cheated out of it by the wealthy but generous man.

The bond between Nila and Pari is explored next. Pari truly understands her mother but it doesn’t make it any easier, especially as Pari always has this feeling like something is “missing.”

The story of Markos’ friendship with a young girl is heartrending but beautiful as well.  The young girl has been permanently disfigured by a dog bite; and though totally revolted initially, Markos and Thalia grow as close as siblings and remain so their entire lives, especially in their connection to other characters in this fictional tapestry.
A reunion will end this novel, one that will initiate a freedom for the daughter of Abdullah, who wound up in America running an Afghan barbecue restaurant but is now old and ailing and his sister Pari.

So much can be said about this story of real and evolving sibling relationships.  Though not quite as violent as Hosseini’s previous two novels, there are fierce moments but more of a sense of honesty, integrity and endurance that truly evolves into bonds of connection equal to and greater than siblings.  No, I haven’t by any means given away the whole story; there is so much more in these pages that is compelling, intriguing, brutal, funny, tender and just sheer beautiful.  Khaled Hosseini is a literate fine, fine writer and this book is his best yet!!!! This reviewer hated it to end and is hoping Hosseini will keep writing which he does so magnificently!!!! This novel deserves multiple awards for its greatness! Enjoy every line, every page!

Posted by Viviane Crystal at 5:56 PM No comments: