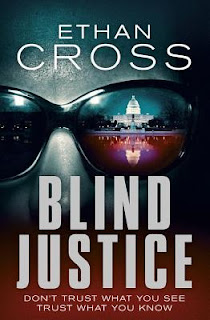 Deacon Munroe, a blind investigator, is called to work on the deaths of a friend, a top-ranking general and his wife.  The reader already knows that the General died without revealing what his killer demands to know.  However, the killer makes the General kill himself and so it looks like the General killed his wife and then himself.  But Deacon, a remarkably skilled investigator, immediately realizes something is wrong with the crime scene. And so begins an unbelievable tale in which there is a far larger conspiracy to carry out a drone terrorist attack in the middle of Washington, D.C. at the National Mall.

This is a middle-sized novel that packs enough action that it’s over the top of tension.  The extremely perceptive skills of Deacon Munroe, accompanied with a calming sense of class and style, make the entire story fascinating as the rest of it feels like a montage of every crime novel that’s been written in the last five years.  The success of a crime or thriller novel lies in including something unique that can’t be found in any other story or a particular style that enhances the stereotypical criminal story.  Deacon Munroe is that person!

Early on in the story, Munroe, suffers a great loss and soon thereafter he realizes that he’s always been in love with his late friend’s sister.  But the hunt for answers lies larger than that attraction and Annabelle is not ready for Munroe’s brief attempts to get closer.

The task at hand is to stop a killer from getting his hands on something that could be responsible for a chemical attack that would kill thousands.

I’m not sure how I felt about this novel riddled with deaths, violence and surprising evil.  No break in the action allows one to grab one’s breath.  The reality of the possible terrorist action being planned is probably what is responsible for the tension one feels while waiting for how this action will unfold!

Nice characterization and plot, Ethan Cross!  Great for lovers of the mystery and crime genres!

Posted by Viviane Crystal at 12:34 PM No comments:

Thoreau in Phantom Bog - A Henry David Thoreau Mystery by B. B. Oak 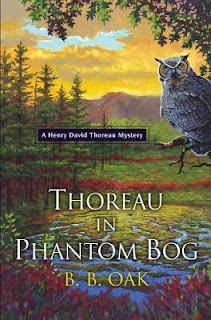 Phantom Blog is located outside of Plumford, Massachusetts and its name arises from a tale about a runaway slave who still haunts a bog that escaping slaves still have to occasionally cross when being pursued by formidable, relentless bounty hunters or owners.  Now the tale comes to the attention of Henry Thoreau as a farmer who lived not far from the bog is found murdered.  As he was a member of those assisting slaves attempting to flee to Canada, a group known as the Underground Railway, the assumption is that he was helping a slave when he met his violent demise.  The question is obviously who killed him?

A friend of Henry, Julia, is also eager to help by becoming part of the Underground Railway but she is not so readily accepted because of its secretive nature and because she’s a woman.  Add to that she is separated from her husband who is all for slave-catching.  Julia, however, couldn’t care less because she’s in love with the town’s doctor, Adam, and having an adulterous affair with him.  Now the two lovers are about to become deeply involved with Henry Thoreau in the aforesaid murder and later on a different murder.

Add to the cast of characters a Sheriff who is all accusatory bluster without much substance, an old granny who is bedridden but knows everything going on and predicts what is to come, a slave who practices voodoo medicine in a way that heals people who cannot be healed by a regular physician, a slave owner and catcher, and more intriguing people at every turn of the page.

B. B. Oak knows how to create a good mystery while lacing the story with enough tension and fascinating scenes that keep the reader riveted to the story to the very last paragraph.  We also learn of the virulent and passionate sides taken in this divisive issue with very little middle ground in the mid-19th Century.  Slaves were owned by men and women who saw this possession as a financial boon not to be interfered with or as a rabidly poisonous and demeaning practice that needed to be abolished.

Also there’s an interesting aside about the Thoreau and Emerson (Ralph Waldo for those not of a literary mind) families that might be fact or fiction – more mystery!

A good mystery slowly but powerfully demolishes the assumptions of characters and readers about the “who done it” presentation of pivotal characters.  This is the remarkable gift of Henry (and the author’s vivacious skill) that makes him the singularly intriguing sleuth he is herein.  Highly recommended historical mystery!!!

Posted by Viviane Crystal at 12:20 PM No comments: