Faithful: A Novel by Alice Hoffman 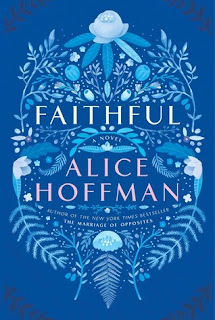 A car accident happens in a flash, and Shelby is severely injured.  She will recover from these physical wounds but mentally and emotionally she is devastated because her friend, Helene, who was a passenger now lies in a permanent coma.  While over a period of time, visitors arrive to visit Helene and are healed of incurable ailments, Shelby can’t bring herself to visit Helene for the miracle of restoring a devastated sense of self-worth.  Shelby repeatedly says, “I am nothing,” a short sentence that makes her parents and friends cringe.  Little by little, Shelby becomes a recluse in the basement of her home, her own worst enemy, a young teen unable to forgive herself.

Although Shelby lives in a perpetual state of despair, the reader gets gimmers of some spunk still occasionally rising to the surface.  This, then, is the story of her recovery, inch by inch, step by step.  As part of her self-imposed penance, Shelby has shaven her head and lost a tremendous amount of weight, making her appear almost ghost-like.  The reader is almost as desperate as Shelby and wonders if there’s any chance of hope for Shelby or Helene.  Ironically, Helene’s mother finds purpose in her daughter’s unspoken mission, to heal and make other persons whole.  For Shelby it will, surprisingly, be dogs who contribute to Shelby’s awakening!

At first Shelby identifies with homeless people she meets but is astounded at the hostility and rejection she experiences, that is until she meets Ben.  He’s the first person who is frank with her at all times, telling her how her appearance and attitude are horrible.  But because it’s done with honesty and without cruelty, a glimmer of the truth he speaks begins to sink past Shelby’s self-hardened exterior.  Little by little, Shelby will develop an interest in healing animals, thinking perhaps she should become a veterinarian.  She’ll also make some huge mistakes in love but will learn to accept these weaknesses gradually.  One can’t forgive the large catastrophes without learning to let go of the small errors.

Alice Hoffman’s writing has certainly evolved over the years.  Thoughts and feelings are explored in the depiction of her characters.  Instead of pointless and self-destructive words and deeds, Shelby explores the reality of those around her.  What looks like love frequently is dependency interlaced with denial.  There’s a fine line between the experiences of guilt, self-recrimination, and self-pity.  So many layers of thought and feeling are depicted, definitely Hoffman’s gift to explore and express.  This novel is fine, fine reading which this reviewer highly recommends! Stunning, dynamic contemporary fiction!

Posted by Viviane Crystal at 3:19 AM No comments:

Hard to Die by Andra Watkins 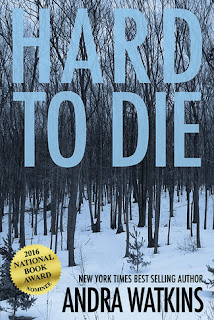 Theodosia Burr Alston, the daughter of Aaron Burr, is fiercely defensive of her father, believing others led him astray and that even others allowed his duel with Alexander Hamilton and his trial over supposedly being a traitor to label him as an infamous character.

It’s now 1950 and Theodosia is having a hard time accepting that she is dead and between worlds.  She has been given a mission, which she has to figure out herself with the occasional hints of a “Guardian.”  She has already failed four times and will have thirteen times to get it right.  If she doesn’t get it right, she will be forced to remain forever in this limbo of an existence.  So she’s a divided character.  Part of her wants to know the mission and complete it and the larger part of her wants to kill General Wilkinson, Aaron Burr’s partner at one time in planning an invasion of Mexico.  But now General Wilkinson has a different role, one which is rather confusing to the reader at times.

We next meet a West Point Cadet, Richard Cox, who used to be a spy against the Russians.  Now “George” is forcing him to return to the spy business and Richard wants no part of it.  George tells Richard that he will die if he doesn’t return.  It seems there’s a spy who has been caught and some vital information is on the loose about nuclear weapons.  Remember 1950 was a time of virulent anti-Communistic opinion.  The plot gets murky, however, when the reader is not sure if George is on the sides of the Americans or Russians at odd moments here and there toward the latter part of the novel.

Some other historical figures enter the fray as Theodosia and Richard get closer and the forces against them are oppressively close and threatening.  All the historical characters in this novel have a good side and an evil side, and the reader must keep flipping the pages rapidly as the author does such a great job in mixing up the conclusions readers want to shape from the very first page.  That takes talent, indeed!

How many times can one die?  Does goodness guarantee one will win the challenges that rapidly and forcefully impress Theodosia and Richard?  Will these life-threatening scenes end in the separation of Richard and Theodosia who are getting ever closer?  Good story, Andra Watkins!

Posted by Viviane Crystal at 3:11 AM No comments:

Breathe in Grace: A Zev Evans Novella by James LePore 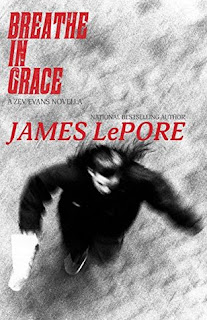 Zev Evans is a fixer, a tender man who aims to help the “down and out” by doing whatever is needed at any moment.  The enigmatic part that makes this novella phenomenal thriller is that sometimes Zev operates alone, shooting victims in the forehead fast than they can lift their guns. Sometimes he calls on his “friends” to set up meetings or get information needed to complete his complicated task.

The action quickly starts when coming out of a piano recital, Zev sees an Arab-looking man smack a young woman so hard in the fact that she almost falls over.  The man having the appearance of an Arab has nothing to do with Zev’s fury; it’s seeing someone supposedly strong abuse a woman.

At one time Zev was a Marine but was honorably discharged for taking out another Marine, who wasn’t the good guy everybody claimed he was but was probably actually a traitor.  Seeing injustice makes Zev crazy; he’s got these “wild horses” in his head that he can only control with drugs that assist the effects of the plate in his head.

To say more would spoil an amazing story but suffice to say that Zev and his friends tap into what this Arab is secretly doing.  Let’s just say that young woman isn’t the first to be severely harmed and the Arab’s got bigger plans going involving a very complicated and dire issue.  Yes, Zev will finish the task he’s obsessed with but the reader will be flipping the pages rapidly with all the surprise twists and turns that pump up the plot to its final, satisfying climax.  Despite his furious temper, Zev is a highly intelligent and gentle guy whose personality is totally embraced by the reader by the very last page, which by the way will make you want to read more about this unique, vigilante style “fixer.”  Stay tuned – a prequel will follow very soon.

Posted by Viviane Crystal at 5:42 PM No comments: