The River of No Return: A Novel by Bee Ridgway 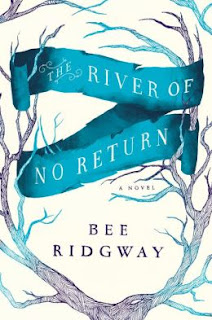 “Time flows like a river and it seems as if each of us is carried relentlessly along by time’s current. But time is like a river in another way. It flows at different speeds in different places and that is the key to traveling into the future,” British Cosmologist Steven Hawking writes.  Bee Ridgway has taken Hawking’s theory and gone one step more in her amazing new novel.  Time and speed may be, as the main characters come to realize, also connected to intense emotional energy.  This novel certainly suggests that as the main protagonist, Nicholas Davenant or Lord Blackdown, “jumps” from 1800s Spain to 2013 London, eventually settling in America.  He has been trained to survive in this new life by the Guild, a secret group who help time-jumpers like Nicholas adjust to the new environment, including clothes, language, manners, culture, and so so much more!

However, just as Nicholas is settling in, with the only thing bothering him the face and appearance of a mysterious black-haired girl whose mysterious presence has helped him survive his terrible war memories, he is called back to England by the Guild who is going to send him on a secret mission with a burly Russian Guild member.  Their job is to find the Olfan, another group who have mastered time travel but have other ways of accessing the future and past.  The question as the story progresses becomes murky as Nicholas, now the Marquess Blackdown, cannot tell who is friend and who is foe.  Also when he meets Julie, his next-door neighbor, she is being held prisoner and at the same time discovers she possesses phenomenal powers regarding this time jumping issue.  She and Blackdown are increasingly drawn closer to each other but go no further because of the mystery that needs to be solved.

For what if those capable of jumping into the future encounter an unsolvable problem?  Can all of the Guild and Olfan members stop this new aspect of time that is life-threatening, to say the least?  Why are so many people after Blackdown and Julia?  Should Blackdown participate in a historically significant law vote that could destroy his own aristocratic world or free it with dramatic effects that will last for centuries?
There is much more in this amazing fantasy novel that also has a touch of history, plenty of magical moments, intense high-pressure scenes where foes fight to the finish…

Read The River of No Return for a strong tension-filled plot, stereotypical characters who surmount their boring peerage definition and those with immense intelligence who help our main characters wait at appropriate moments and lurch forward into action during quieter moments!

Posted by Viviane Crystal at 5:20 PM No comments: 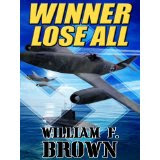 WWII is almost at its brutal, ruthless end.  Our story begins with Ed Scanlon, an American OSS officer, and a British   SOE officer about to travel to Germany where they will parachute out of a warplane and begin a mission that they're told will be "a piece of cake."  Not quite! Instead he is wounded, saved by a Russian-German agent, Hanni Steiner.  They fall in love but Hanni knows theirs is an impossible relationship as she is the daughter of a famous Russian government official, one who would be heavily punished if she were to abandon her mission.  She's one gritty, tough gal and Scanlon is a fine match.

Scanlon is caught by Nazi soldiers under the leadership of Otto Dietrich, the Gestapo Chief of Leipzig, Germany, who relishes torturing enemy combatants.  Scanlon is broken by the torture before being rescued by Hanni and her colleagues and then forced to return to recover in England.  At first he refuses to consider any further mission, wanting "out" for good.  Why?

The ultimate mission Scanlon is ordered to complete is to accompany five German scientists to England.  These scientists are brilliant, having invented a might warplane without the need for a propeller and other aspects that are revolutionary and would change the face of war forever, guaranteeing victory for whoever possessed such knowledge.  After a brief physical altercation with another officer, Scanlon is given a choice to spend the rest of his life in a military jail cell or complete the mission. The choice is obvious and he returns.

The caper turns out to be more complex as it seems there's quite a bit of competition with Russia, Germany, Great Britain and America all vying for these German scientists and the information they own, and the nations have no compunction about using each other to attain their devious goals.

Winner Lose All is a tightly written thriller story that never stays still in one place for the reader to get complacent or even semi-bored.  One gets a good look at the machinations of world leaders like Stalin, his government and military leaders, Churchill of Great Britain and others who think out loud about each other and play their cards close to the vest until the right moment for pivotal action!  If you love war stories, political thrillers, adventure tales, and just straight, well-plotted action novels, this is your next read!  Nicely done, William F. Brown!

Posted by Viviane Crystal at 1:45 PM No comments: 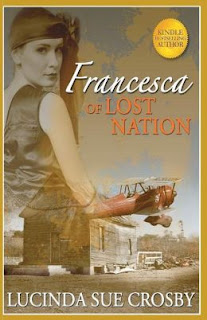 Francesca of Lost Nation: A True-Life Novel. Lucinda Sue Crosby. Creative Space Independent Publishing Platform. April 2013. 340 pp. pbk. ISBN #: 9781460919811.
Francesca and Sarah, grandmother and granddaughter bonded by a phenomenal love, live a normal life in Lost Nation, Iowa in 1940s America.  Francesca is a woman who flouts most traditional roles expected of woman, possessing an independent and adventurous streak that is grounded in her love of family.  She has had one great love which she lost to her sister, a fact that wounds her so deeply that her relationship with her sister Maude is fraught with tension for all too many years.  She marries a fine man, Cox, who has since passed away and now concentrates of her love of life and her special gift with animals and nature.  Her daughter Rachel and husband Daddyboy have won a trip to Paris.  Sarah and Francesca are about to have the summer of their lives!
After the lucky couple leave for Europe, an arsonist appears in Lost Nation and the sheriff asks Matthew Mosely to stay with Sarah and Francesca as a matter of protection. A great love begins underscored by the possibility that Matthew might recover from his flight accident wound and choose to leave.  Instead they focus on relishing every moment they have together.  This includes county fairs, learning to fly, mending the wound between Francesca and Maude, finding a stray but lovable dog, finding a cave with amazing drawings of a final Indian battle, and so, so much more.
Words can hardly convey the engaging, enchanting quality of this story which has a simple plot but whose characters are so real and dynamic that one never wants the story to end.  The cover is dull and reflects nothing of the superb writing evident in this beautiful story that never dulls and develops, the characters growing in wisdom, humor and strife as in real life.  Love can make or break a person, and Francesca teaches and learns how to handle both sides of that enigma; the result is a granddaughter who inherits and absorbs the same from her gifted, flamboyant, and charming grandmother.
Francesca of Lost Nation is fine historical and romantic fiction that should be a best seller and would make a grand movie or even a Broadway show!  Read it and immerse yourself in outstanding fiction!

Posted by Viviane Crystal at 6:13 PM No comments: