The Guest House: A Novel by Erika Marks 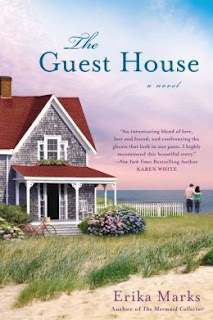 Edie, Lexie, and Meg Wright, three generations of women strongly affected by the summer visitors to their home in a small Cape Cod town, are each hoping to leave behind the painful memories that each have from love gone awry.  Edie has a construction business composed of women and is shocked when she is asked to take part of the project to repair and prepare the Moss family’s summer home and cottage for sale. For Tucker Moss broke her heart back in the late 1960s and her son and late husband have quite a resultant familial, protective hate for the Moss clan.  How will they react to her new friendship with Tucker’s friend Jim.  Can two adults escape the attitudes of younger, unforgiving family members or can they forge something new and exciting?

Lexie has just returned from studying architectural photography in England and is now surprisingly asked to do the photography to prepare the home to be registered as a historical home, but this is also the home where she fell in love with Hudson Moss and was dumped by him as well. It’s also the place where Hudson’s brother, Cooper, gave her a comforting first kiss right after she was jilted by his brother.  So who should be there to let her in and serve as guide to her but Cooper.  Both think the other forgot that night years ago, but that’s not so at all!

Lexi’s brother, Owen, is grieving over a divorce and treating his daughter, who is a college student, like a little girl. Meg’s got a lot on her plate with her mother’s constant text questions and her father’s expectations. How will she grow during her summer vacation – or not?

Meanwhile, the “wash-ashores” or tourists are pouring into the town of Harrisport, Massachusetts and business is booming.  How will the beginning of love burgeon in a way to heal old wounds and clear the path for what will hopefully be more than just a new summer season to be relished every second? Some secrets will be revealed, some misunderstandings cleared and others aggravated.  Most of all a secret carved into framing will force changes in attitude, forces that can make or break the futures of the Wright and Moss families.

Gentle and fierce passions rule these pages and Erika Marks knows how to satisfy the curiosity of the reader and keep it fueled with a complex, endearing romantic plot to satisfy every lover of this genre.  Prepare for a great summertime (or anytime) read!  Very nicely done, Erika Marks!

Posted by Viviane Crystal at 5:21 PM No comments:

The Time Between: A Novel by Karen White 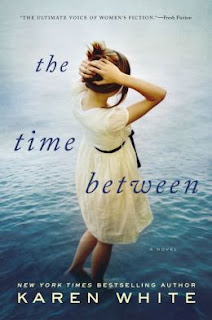 “There is how we were before, and how we are now, and the time between is spent choosing which doors to open, and which to close.” Yes, this is the essence of two families’ stories, lives in which choices were made that have shadowed years upon years right up to today.  For Eleanor Murray it is her vivacious, adventurous personality that called her to issue a dare to her sister with life-changing, tragic results.  However, a larger choice is truly what has since affected the relationship between the two sisters, the choice to live riddled with guilt and shame rather than freedom and progress. Eve, Eleanor’s sister, marries Glen to whom Eleanor was once attracted and they are only now learning to live for the future.

At the same time it is Eleanor’s boss, Finn Beaufain, who hires her as a companion to his Aunt Helen and trusts her with his fragile, brave and wise young daughter.  They all soon get to know each other much more deeply, learning of dreams unrealized, of musical talent stymied by grief, of beautiful art holding past secrets with historical and personal significance defying words, of trust betrayed and lost or restored, and of love’s possibilities.

Three sisters have beautiful voices in WWII Hungary.  Due to German occupation, they are forced to flee their beloved homeland.  How will they fare, when one has fallen in love with a German soldier and one a Jewish resistance fighter?  And why does the remaining sister hold such bitterness and self-loathing because of that past and how it led to her present dread.  What is it about Eleanor, Helen’s companion, that reminds her so much of the past?  What is it that recognizes a parallel story, one that she uses to push Eleanor into a future free of burdens?

An accident is just that, isn’t it?  A secret kept to protect a beloved sister is hidden for a noble purpose, isn’t it?  How important is it to forgive another person and one’s self as well? And even more precious is the question of how can a precious home on the beautiful island of Edisto, South Carolina be a tender, powerful healing factor in the lives of multiple people?  Will nature work its divine magic on those who have eyes to see, ears to hear and senses that need touching? Are these souls open just enough to allow the salve of nature’s beauty to mend ailing hearts and spirits?

The Time Between: A Novel is a beautiful, poignant story that one doesn’t want to end.  Karen White’s deft manipulation of a complex plot is clearly matured in this story that is even better than her previous novels.  A story that is so painful is here crafted and presented with exquisite beauty and sensitivity that is a joy to read and experience.  This is a MUST read as it is indeed superb fiction!

Posted by Viviane Crystal at 5:13 PM No comments: