The Plague Diaries: Keeper of Tales Trilogy #3 by Ronlyn Domingue 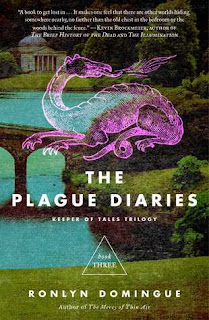 
Secret Riven is no longer advertising her magical powers.  Instead she has become somewhat of a self-educated scholar who works as an archivist in the magnate Fewmany’s offices.  This is not your local library, but rooms and rooms of books in every possible subject, including books and objects to do with magic, sorcery, legends, myths, etc.  The formerly very close relationship between Secret and Nicholas the Prince has changed with their separation, something Secret doesn’t realize until they meet again well into the novel.

The story herein grows at a sedate pace in which the reader grows to share Secret’s love for animals, plants, and nature wherever they are found.   Little by little, the reader finds that Fewmany has a purpose in befriending Secret, although she doesn’t really figure that out until much later.  Meanwhile, Fewmany seems to be trying to broaden Secret’s horizons, inviting her to dinners, etc. at which some guests and scenes frighten Secret.  These pages are replete with weird costumes, animals and figures with strange powers, and strange events.  One gets to know many of the main characters in the government.  The author does a marvelous job in stretching all of this out in an intriguing way so that the reader doesn’t really mind that the crux of the quest isn’t revealed immediately.

The Old Woman who was introduced in the first novel of this series, a new character Harmyn, Nicholas and Secret eventually will try to discover the connection between a certain symbol in an ancient manuscript and other symbols available elsewhere.  No spoilers here, but it all ties together eventually.  In the process, Secret Riven becomes aware that her repressed gifts of connection to nature and languages can be used maturely when appropriate.

This reviewer appreciates this final version of the Keeper of the Tales Trilogy as well-written, even though it is a stand-alone novel, and highly recommended to readers who love a good mystery with paranormal features, friendship, loyalty and engaging quests.

Posted by Viviane Crystal at 4:21 PM No comments: 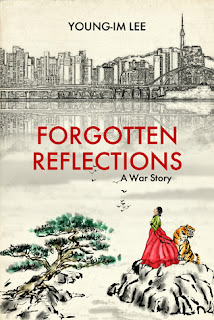 1945 ended WWII and South Korea is still recovering from the Japanese Occupation.  Anything that was edible was stolen by Japanese troops, therefore the poverty and struggles of farmers and local businesses is an ever-present, poignant reminder of the terrors of war.

Ji-Iseul, Jung-Soo and Yeong-Hoon are the three main characters in the story, which changes from present to past repeatedly.  Ji-Iseul initially is an elderly person being moved into a hospice as she is suffering from advanced Alzheimer’s disease.  The granddaughter Jia encourages her to tell what she can remember, inspired by a guitar that sits in the corner of her grandmother’s room. An old piece of paper is found inside the guitar and that is the catalyst that makes the memories return to Iseul.

The relationship between the three characters is depicted as a close one, although the reader is never sure whether a romance is developing or not between Iseul and Jung-Soo.  Iseul is not that attractive but instead is admired by her father because she is such a hard work at “making paper,” a task that is quite difficult.  Jung-Soo’s father is a rich man forcing the neighborhood to pay high taxes and living in a rich man’s home known as “The Golden Palace.” Yeong-Hoof is crippled but works hard for ISIL’s father.  He is betrothed to Iseul but nothing further comes of that until the Korean War.

The life of the Koreans before and after the Korean War is a hard one, fraught with poverty and suspicion.  One character, it is believed, steals rice that the people desperately need.  American soldiers are portrayed as caring one minute but callous to the needs of the people the next.  During war, some can leave without worrying about the future of the people left behind.

This isn’t a comforting story but it’s a necessary one. The author writes an epilogue about the Korean people being victims who have not truly decided what their country should be, democratic, communist, or otherwise.  They believe more war will come.  Whether that happens or not, this is a novel for the world to read, to realize that work, relationships and growth with change is vital for a people to become secure in themselves and not always dependent on the prevailing opponent waiting to devour more of a victimized South Korea. Recommended, despite some minor flaws in plotting, historical fiction!

Posted by Viviane Crystal at 4:12 PM No comments:

How To Change A Life: A Novel by Stacey Ballis 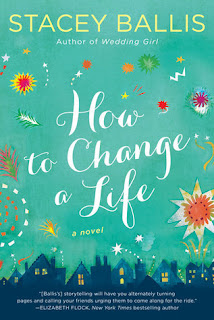 Meet Eloise, a very talented chef, whose delicious descriptions of food and meal menus will either make you raid your refrigerator, dine out in high-end restaurants, or make you want to sign up for culinary school.  She has a wonderful job as a private chef for a rich family and every need she could possibly have is provided by her boss.  Romance is out the window as memories serve as a barrier to finding someone who can be trusted and who values her as a person.

So if one is content, why is that little internal nudging voice telling her there’s more to life?  The question roars to the fore when she gets together with two life-long friends, Lynne and Teresa.  They are all in the same boat, feeling content but incomplete.  So what do they do?  They set up a challenge for each one of them to complete over an eight-month period.  To make sure there are no shenanigans, they not only set up their own list but add items from each other.  That is the premise of this ambitious, feisty crowd of women that is the essence of this novel.

What will fascinate readers about this plot is what each one learns from the process of seeking higher goals. That is the essence of change, accepting one’s strengths, weakness, and foibles that could fall into either category.  There’s also a sense of intuition that needs to be recognized and honed to know what situations are life-giving and what scenarios are the road to disaster or at the least disappointment.

Eloise is definitely a different woman at the end of this journey, as are the other young women, and more of a fulfilled gal!  That doesn’t mean the trip is over; in fact, appreciating the process or proceeding to obtain goals adds a vivacious quality to Eloise’s life that is so attractive, in addition to a fine romance that engages the reader as well.

How To Change A Life is an enchanting contemporary story that will keep readers flipping the pages to the very last page, wishing the account would never end!  Very nice job, Stacey Ballis!

Posted by Viviane Crystal at 4:03 PM No comments: