A Barcelona Heiress - A Novel by Sergio Vila-Sanjuan 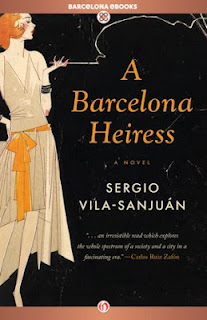 Barcelona, Spain is on the verge of Civil War in the 1920s.  The story of this multi-layered conflict is narrated by lawyer and journalist, Pablo Vilar.  He's a man who in the name of both careers attempts neutrality in the conflicts but also a man who is constantly being swayed by partisan characters who want him to write articles favoring or defending one side against the other side.  While he is not influenced that much, what he sees and hears is worthy of our attention, for it is the "stuff" of which revolutions have been made for centuries.

The eternal conflict between rich and poor is factually proven when Vilar is taken to the "caves" where the poor live and subsist on almost nothing or the private hospitals financially supported by those with a heart where starving, disease-ridden children are treated with the meager supplies of medicine and vitamins, food, etc.  There are the union groups who are willing to incite and practice violence to obtain their demands.

All of this is exemplified in the mystery which is the center of the story.  It involves an anarchist who assassinates those who have committed crimes but been declared innocent by the courts. There's the heiress of the novel's title whom Vilar would wed but who continues to exert influence on both royalty, nobles, anarchists, union groups and the poor. She is a "woman for all people" and yet one wonders what principles center her real beliefs.  And what about the cabaret singer who is brutally attacked and whose connections are less than innocent or neutral.

One gets a fine sense of the culture of Barcelona and the governmental structure behind the story, involving royalty as well as city, military and provincial authorities.  What Vilar hears in true political style is not what necessarily is!  All is encountered during the most audacious and extravagant social parties and events.  It is hard at times to follow the story because of all the name-dropping that no one could possible remember unless a master of Spanish history.

All in all, A Barcelona Heiress is a fascinating, well-researched work of historical fiction that is packed full of action, mystery, humor, poignancy, and so much more.  Money rules the world - and it can also reform and transform the same!  Impressive novel!

Posted by Viviane Crystal at 5:07 PM No comments:

The Second Empress by Michelle Moran 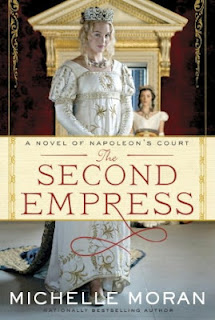 Michelle Moran has written a novel about the courtly life of Napoleon Bonaparte and his family.  The story is told from the point of view of Maria Lucia, Princess of Austria, who will become Napoleon's wife after he discards the cheating Josephine; Pauline, Napoleon's sister, who really believes she is like Cleopatra and in truth would like to marry Napoleon and be Empress; Paul Moreau, Napoleon's Haitian chamberlain, trusted by all and serving almost like a Greek chorus in this evolving tragedy; and other characters who have forgotten their origins and become ambitious and proud beyond the mere definition of those words.  This is a stunning story!

The reader will be hard-pressed not to have severe reactions toward these selfish and sad characters.  Pauline seems like a crazed, delusional woman who becomes the master manipulator and shows very little "care" except to Paul and the Empress.  Paul has achieved his freedom at the cost of a sacrifice beyond bearing; ironically he is respected and heard by Napoleon as the latter realizes the fawning lies he hears from all others in his court.

The tension increases as the desired peace, after so many years of war, eludes France and war looms large, forcing changes and decisions that will show the essence of truth of each character herein.

Michelle Moran has an exquisite gift of depicting characters.  Yes, some are stock characters who are just plain nasty people, but others show an educated, compassionate, and cultured side that is the beauty lying behind this tale of pride that goeth before a grand fall!

Masterfully told, Ms. Moran.  No, it's not full of historical events but it does portray the personalities shaping those same events that have already been told numerous times in other places.  Great historical fiction!
Posted by Viviane Crystal at 6:02 PM No comments: 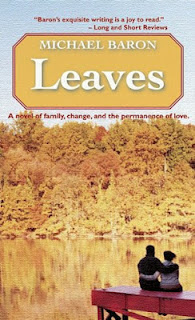 The "Sugar Maple Inn" is having its last Halloween party.  The original owners have died; but although the adult children are planning to sell the bed and breakfast inn in this lovely Connecticut town, they are determined to have one last party that has always been a family and town tradition. But troubles beset each family member and it seems like it will take divine intervention or something magical to make it all come together!

This is a unique story in that each child has his or her own story that could be a stand alone, with high and low moments, as in all families, novel.  There is Deborah who is a bona fide chef for the inn and whose recipes and meals will make the reader's mouth salivate as these descriptions are exquisite.  But where is she to go after the inn is sold?  Should she start her own business?

And what's the story with the visceral animosity between Corinna and Tyler?  Tyler has been taking skilled photographs of the famous leaves of the area, an education in itself for those not familiar with various types and colors of autumn leaves, but his works are not selling so well any more.  What is his future?

The tension mounts as there are only three weeks left to prepare for this huge party, a tension heightened by personal and familial conflicts.  Yet through it all each character shares a nostalgic point of view, honestly portrayed with victories, disappointments, fights, and resolutions.  Add to that a poignant ending that will pull a tear from the hardest of hearts!

Leaves is plainly a lovely, lovely story that will be enjoyed by all readers.  Sometimes, potency is conveyed without a stick of dynamite because it is just so - like most of our lives - very real!  Grand job, Michael Baron!  Keep writing and thanks for the diverse characters you depict so well in all of your books!
Posted by Viviane Crystal at 5:24 PM 1 comment:

The Winemaker by Noah Gordon 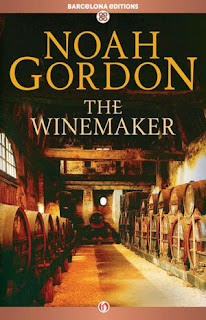 Josep Alvarez might be called a self-made man, but that appellation would be missing the essence of his visionary nature.  Initially, he is a young boy trying in any way he can to get employment for his family, suffering devastating poverty and famine as their wine-making business is failing.  Civil War is tearing Spain apart in the early days of the 20th century.

As a very young man, Josep tries out to be a soldier but he's not sure on which side he's being tested for.  A grim training officer is taking Josep and his few friends through a grueling program involving physical stamina, guts, sharp shooter skills, etc.  Finally, Josep and all of his friends are chosen to participate in a secret mission that will make Spain reel and even though only an observer will make Josep look over his shoulder for years and years to come!

Escaping to France, Josep becomes an employee of a wine-grower who teaches him the "art" of growing fine grapes and producing finer wine than any produced in Spain.  That apprenticeship ends when Josep learns of the death of his father and he returns to mourn the loss of his parents and confront a brother who has nothing but acts like rich prince!

To say more would spoil the essence of this wonderful story!  Suffice to say, the reader will work fields with Josep, woo a love, work to have restored trust by neighbors and even eventually respect, and so much more.  This is a lovely story that has plenty of conflict and struggle but that same tension seems to seamlessly weave its way through the story instead of being deliberately hammered on the reader as well as the characters.  Noah Gordon continues to demonstrate a versatility and diversity of subjects and characters in his fiction that is the mark of a truly great writer!  Any book by him, including this literate tale, is a must read!!!
Posted by Viviane Crystal at 3:26 PM No comments:

The Trouble with Voodoo by Kristi Ahlers 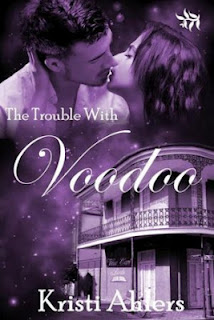 The Trouble With Voodoo. (The Trouble Series). Kristi Ahlers. Tirgearr Publishing. May 2012. Sold by all major e-book sites. 153 KB.

Ashley Quinn is having dreams that are both haunting and traumatizing dreams about a terrible heartbreak.  When she awakes she knows that it has happened to her.  She soon makes the connection that the bookstore she has bought in the French quarter of New Orleans is haunted!

Ashley had been warned by the realtor and a psychic that she was renting, a message she scorned initially.  Now books are flying off the shelves and she's falling in love with Royce Kingston, an 18th century debonair guy who is breaking hearts left and right until he does it one to many times.

Now he's locked in time and Ashley's dreams transport her to that time in which her heart is broken, over and over on a nightly basis.  Now she knows the only way to heal her own heart is to free the man who broke hers?

Sound confusing - it seems so at first.  But then we realize that Ashley must truly find what it is about this sexy, swashbuckling guy that makes a gal lose her head and heart, even against her own best interests.  She'll also meet a voodoo woman who has had enough of watching Royce's cold, callous behavior toward woman.

Perhaps all will learn the real power of voodoo to change lives as well as the troubles when voodoo and love collide!

This romance novel is marked by just the right balance of heartache, sexy passion, and haunting mysterious effects and affects to create a credible plot as well as tension and fire in every reader! So far this reviewer has found this novel to be the best in a notable "Trouble Series."  Nicely done!
Posted by Viviane Crystal at 2:55 PM No comments: