The Paris Librarian: A Hugo Marston Novel by Mark Pryor 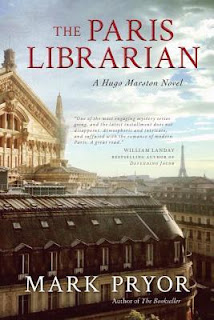 Hugo Marston is a book collector of first editions but also a security officer at the U.S. Embassy in Paris, France.  His friend, Paul Rogers, calls Hugo to tell him about a signed first edition of a Truman Capote novel.  Imagine Hugo’s shock when he proceeds to the American Library in Paris to find Paul Rogers dead in a locked room.  While there is an ongoing investigation there’s much annoyance from other library personnel as it seems obvious that Paul finally succumbed to his heart condition.  But Hugo’s innate sensitivity believes there’s more than meets the eye and the rest of the novel follows his instincts and investigation, once again displaying Hugo’s skills and talent as a former FBI profiler.

The story turns to a mysterious case of the actress Isabelle Severin who wrote letters during WWII.  Some of those letters are public and some are private but the fascinating part of this mystery lies in the fact that she might have been part of the Resistance movement during WWII and might have even murdered an SS Officer with a dagger.  So why is that such a secret and who would want the contents of the letters to disappear?  And what does that have to do with the death of Paul Rogers?
The story isn’t that complex but reading how Hugo Marston again (this is the sixth novel in this series) intelligently explores the facts and rumors behind Paul’s demise.  He always displays a remarkable calmness even as he gets closer and closer to the killer and the story behind the murder.

Mark Pryor excels at good old-fashioned mystery storytelling, gradually leading the reader from simple scenes into intriguing clues all the way to a very satisfying conclusion.  Part of that success lies in careful characterization of Hugo and other supportive and opposing characters in the story.  All in all, a riveting and intriguing international mystery sure to please mystery and thriller fans and those new to the genre.  Nicely done, Mark Pryor!

Posted by Viviane Crystal at 6:39 PM No comments:

Kennedy and Roosevelt: The Uneasy Alliance by Michael Beschloss 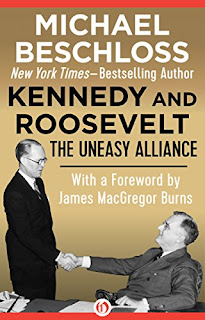 Politics and business are the world of these two renowned men, Franklin Delano Roosevelt and Joseph Kennedy, ranging in this analysis from the 1920s to the death of Roosevelt.  The initial question that the author poses from the very first page is whether great politicians and those who serve them serve out of the public good or self-interest.  While it might be hard to refrain from an automatic response, Beschloss does a fine job of depicting how these motives frequently operate singularly and equally operate hand-in-hand.  Beschloff’s analysis attempts objectivity, citing only other supportive and opposing viewpoints on each issue challenging these men in the tumultuous times after both WWI and the Depression.

A concise but informative biography of each man begins this text, surprising the reader with the fact that both men suffered from social caste stigma, Roosevelt from his privileged background that shut him out from many youthful peers and Kennedy the Irish background that the upper class devalued in the days when the Irish fled the poverty and starvation of their home country.  However, both men like their forbears clearly displayed the tenacity and charm necessary to make their way from unfriendly to friendly and supportive colleagues and friends. Perhaps this is what initially bonded both men to each other as close knit friends before their differences polarized them into a breach that could not be healed.

Franklin Roosevelt was a mediocre speculator in business at best and this is indeed ironical as he was the President who would attempt to heal the nation and Wall Street after disastrous financial performance or lack thereof.  Kennedy, on the other hand, was astute in financial skills and we learn how his years as Chairman of the American Securities Exchange helped heal the Depression after-effects.  The media’s relentless criticisms, analyses and support are described honestly and carefully.

Not to spoil the rest of the story, the friendship between these two men grew closer, much to the chagrin of many White House personnel and it wasn’t until the potential for another world war loomed large with the bombast of Adolf Hitler that the split began between Roosevelt and Kennedy.  Multiple comments and editorials stated Roosevelt wanted war but that is not clear after reading these pages although we know Kennedy was consistently against war.

The other fascinating part of this book is the way Roosevelt played the men from whom he sought advice and to whom he seemed to promise undying devotion and friendship.  It’s a frank, realistic look at the world of politics that really isn’t that different from what Americans are experiencing today.  Public or personal interest?  A worthy theme to examine openly and apply to the past and present, presented by an author who has clearly done his research and completely understands the “uneasy alliance” of which he writes.  Highly recommended historical nonfiction.
Posted by Viviane Crystal at 6:28 PM No comments:

The French War Bride: A Novel by Robin Wells 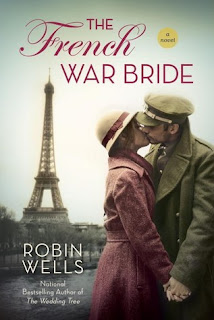 Amelie O’Connor is 93 years old, not given to thinking much about her past, that is until a bold, angry woman, Kat Thompson struts into Amelie’s assisted living home.  It seems that Kat was engaged to Amelie’s husband, Jack and she’s here to find out how that happened because she is dying of cancer and trying to resolve past wrongs and issues. So begins a phenomenal, yet real story of living through WWII in mainly Paris, France.

Amelie and Yvette have been best friends from the time they were children.  Now the Germans have taken over France and every day is harrowing, a matter of survival or death.  Both women watch their parents die directly from the Germans or disease following the starvation conditions imposed by the enemy. However, out of the bitterness and sorrow of those losses arose the feisty French Spirit expressed through the Resistance.  No, it’s not melodramatic stuff of the movies but is day-by-day ferocious passing of information to thwart if not destroy German progress in the war.  During that time, Amelie’s brother works for the French police who obey the German directives and seeing some of his action changes Amelie forever.  At the same time Yvette dumps Amelie’s brother as a boyfriend, she begins to cooperate with the Germans in order to get fragile and important information.  The lack of food and clothing are so tangible that the reader can feel their starvation and see their weight rapidly falling along with other horrors.  Neighbors sometimes help each other and sometimes selfishly deny each other since one mouthful of food can often mean surviving alive another day.

In between the two narrative voices presenting their story or point of view, we see the reactions of both women and the gradual revelation of secrets that forces each woman to face her own lies and truth.  This calls for forgiveness!

The pace of this novel is evenly presented with ever-present rules changing, bringing new crises and ways of coping that are intriguing and keep the reader flipping rapidly through the pages.  The romance is sweet while the cost paid is cruel and yet no less passionate for hard times call for all or nothing investment.

The French War Bride isn’t hopeless at all – it’s invigorating prose that celebrates survival after loss, strength during and after weakness, loyalty despite ever-present traitors, and enduring love that calls forth the best humans can give in the face of the worst others can inflict.  Dramatic and highly recommended historical fiction!

Posted by Viviane Crystal at 5:54 PM No comments: