Storytellers - The Druid - A Short Story by Frank Delaney

Frank Delaney begins this story with a preface about the well-known Bards of Ireland, their various names, their powers, political connections, place in the community, and their wonderful story-telling abilities. Frank Delaney here continues the tradition in this series of short stories, the first being "The Druid"!

This is a truly magical story about a crazy Druid who also knew how to manipulate the people he served with his powers. It's such a short story and not to be ruined by telling too much about it. It contains the proverbial phrases and comments that helped expand a bard's story, but most of all it tells of how much the common Irish farmers trusted the Druid with their present and future, even down to the focus of this story, the possible wedding of a beautiful daughter to one known and one unknown suitor! Every utterance of advice was honored as if it came from the divine!

The Druid is an annoying but funny guy whose end will delight every reader! Frank Delaney is a true Bard sharing his love of fable, legend and stories in the 21st Century, and readers are privileged to enjoy every literate story and novel he writes. Lovely!
Posted by Viviane Crystal at 6:00 PM No comments:

The Land of Darkness by C. S. Lakin 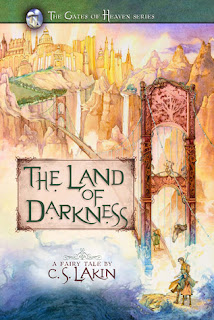 Jadiel has a horribly wicked stepmother who literally wants Jadiel to die. But before she dies, she must find a certain combination of herbs and flowers to make a concoction that will give the evil greater power than one could imagine. First she sends Jadiel off to find bark and leaves from a certain tree. Jadiel knows this is wrong and fears for her father who is besotted with his new wife, actually a hag in the finest sense of fairy tales of the past!

Then Jadiel meets a young man who is highly skilled in woodworking and is off on an adventure to seek a bridge with apparently beautiful and strange etchings worked into it. Now, however, Jadiel and Callen will learn what is truly good and evil within and outside of themselves through the help of a prophet and other adventures they experience on this adventurous journey.

C. S. Lakin writes in the style of C. S. Lewis, having children journey to a wicked city and battle the enemies they meet along the way, including learning about what true sacred living is all about. This author does a wonderful job conveying a sense of the sacred in an allegorical manner, a moral delight to any reader who may or may not believe!
Posted by Viviane Crystal at 5:43 PM No comments: 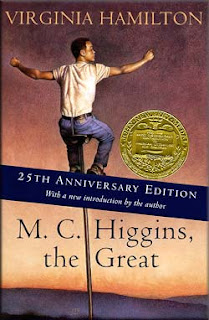 M. C. Higgins loves where he lives, Sarah Mountain, a land in Ohio that has belonged to his family for a very long time. He has a huge pole with wheels on which he sits and can see the entire mountain and even beyond to the nearest town. But what he most loves about the mountain are the trees, animals, rivers, everything about nature with its own moods and beauty surpassed by nothing or no one.

His Dad is very harsh with him but it's a loving harshness. But his Dad just doesn't get the message that the strip mining on the mountain is leading to a natural disaster and M.C. doesn't know how to stop it or how to save his family. He hopes maybe the man coming to hear his Mom sing can get them out of here in time but isn't sure about that.

M.C. will then meet a young girl who will awaken a part of him he never knew existed, even giving him new eyes and heart toward his friend, Ben's family, shunned because of their "witchy" powers. Yes, this is a coming of age book but mostly for those young adults (8-12 years recommended) who love the outdoors and want to learn about how being different can be the best and most heartbreaking thing to happen to any human being.

I thought this book was rather drawn out in points but all in all it's a very nice story and worthy of its Newberry Award!
Posted by Viviane Crystal at 5:23 PM No comments:

Beth Martinez relied on her "abuela" for most of the wisdom she acquired in life. But then a horrific tragedy occurs in her life and then a deep disappointment in love, and now she is determined not to get involved with anyone or anything, believing that these bad events were her fault and that she carries tragedy with her. It's a protective shell she's built that works until now - when she meets one good-looking, hunk of a guy, Sheriff Hank Layton!

The sexual, electric tension between them rises from day one. Hank as well wants to be careful because he's been hurt as well, but he can't stop being so turned on when he's around Beth that he can't think or even breathe.

Beth is hesitant to tell Hank about the phone call threats she's receiving. It has to do with the land on which she lives being ripe ground for a bordering Indian reservation that could rake in millions of dollars in gambling. But she doesn't understand why they need her property and she hasn't a clue who is actually attempting to hurt her and maybe even to kill her!

The mystery behind the threats as well as the steamy passion between Beth and Hank grow proportionately to one wild ride!

A Dry Creek Bed is one hot mamma of a book, and the reader doesn't have a clue to the end about how the mystery behind the threats or the secret Beth is holding back from Hank will resolve. Great romance novel and sure to delight lovers of the romance fiction genre!!! Great story, Avery Flynn!!!
Posted by Viviane Crystal at 4:52 PM No comments: