The Paris Key - A Novel by Juliet Blackwell. 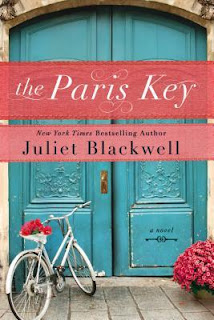 Genevieve Martin learned the art of the locksmith as a child from her Uncle Dave who lived in a lovely little village in Paris, France.  She lost her mother, Angela, at a very young age and has never fully recovered from that devastating loss.  Now she knows she’s at a dead end in life and now decides to get a divorce from her husband.  For the time being she has come to Paris after being notified of the death of her Uncle Dave. He has left her his locksmith shop; and while there will be many difficulties getting a permit to work in France and obtain a locksmith license, she arrives in Paris to see what happens.  Her husband has been unfaithful to her, just once as he says, but that is enough to energize her to make the changes she knows are pivotal for her own survival.

Her arrival in Paris is not a quiet one.  Her Uncle’s home is dirty and old-looking, more like an antique shop than a modern hardware store for locks.  But what is even more astonishing, delightful and even rather overwhelming is the immediate and constant flow of Parisian neighbors, friends and acquaintances of her Uncle.  They know of her love for her Uncle and are determined to help her settle in and learn to love their beloved city.  By the time you are done with this novel, you will want to travel to the City of Lights and experience all you read about in these pages so carefully, sincerely and dramatically presented.  It’s a place to fall in love with and here Genevieve begins her new life.

The story is told in the third person and fluctuates with not only Genevieve’s story but also that of her mother, Angela.  There’s an added mystery that involves Uncle Dave, a Basque artist, a Parisian baker, underground tunnels that were used in WWII by the Resistance to hide Jews and other political characters escaping imprisonment and death by the Nazis and ghosts of the past from long, long ago.

The Paris Key… is a unique story that is a different type of romance, mystery and coming of age tale.  It’s even better than a travel guide because it carries the essence of friendship, food, drink, story, and history that one can only convey through Parisian residents. Delightful and highly recommended!
Posted by Viviane Crystal at 8:01 PM No comments:

Marbeck and the Gunpowder Plot: A Historical Mystery (A Martin Marbeck Mystery Book 4) by John Pilkington 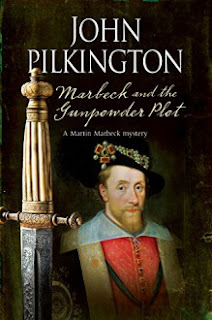 Martin Marbeck is tired, mentally and physically weary, of weaving his way through the snares of the devious plots in the Court of King James in 1605 in England.  He travels under several pseudonyms and is not recognized by his real name until later in this fourth novel of his spying activities.  The country is awash in Papists a/k/a Catholics and those who seek them out for extinction.  But Martin through an excellent source believes there is a more sinister plot being planned that could mean the death of the King and most of his high-placed and favored ministers.

Distractions abound and cleverly keep Marbeck (or John Sanders as he is currently known) from pursuing his instinctive inclinations.  The first is to follow the activities of Thomas Percy, a Papist, who seems to escape from Marbeck’s search at every turn.

A young and beautiful Charlotte de Baume succeeds in seducing Marbeck but very soon becomes a lethal opponent. Marbeck is enthralled and yet wary of her, with excellent reasons.

Using his few free days to follow his increasingly certain suspicions, Marbeck for the remainder of this novel will court danger, as well as past and recent acquaintances, to prove what he would mean absolute disaster for England and its loyal residents.
Pilkington presents an accurate and harrowing tale that shows the varying states of English people, from the glorious dress and elaborate housing of the King and his Parliament members to the lice-ridden, malodorous homes and taverns of the common folk.  He also knows precisely where to arouse and ease tension with an increasingly complex set of characters.  For the Papists are a serious and impassioned group, as seen in the demeanor of a captured Jesuit priest, who are not afraid to risk a certain execution in order to fulfill their mission of bringing souls to Christ within their own faith.  However, Pilkington also includes other nefarious characters who believe there is a better way to change the Protestant domination of the King, a plot that is quite unholy!

Marbeck and the Gunpowder Plot… is a superb historical mystery that this reviewer thoroughly enjoyed and highly recommends, as well as the previous installments in this Marbeck series.  This would make a superb film series as well!

Posted by Viviane Crystal at 7:47 PM No comments: