Off the record, Walter tells Chuck, “I think the Corps of Engineers has got it wrong. I think what we’re likely to have here is the worst flood in the history of the white man on the Upper Mississippi.” Jackson, Iowa is a place in physical and financial crisis!

It rains and storms frequently and severely here, and the levee and flood wall system aren’t up to par with the needs of another flooding system.

But several items are definitely awry, as it seems some water in the town’s water plant which no one seems able to solve. The town project of building a dog track that could save the town’s economy is failing because of union and management conflicts and bad relationships between black and white construction workers. Politics prevail, as usual, and the ever looming media search, dig, and probe despite being treated like the town pariahs they are. They’ve picked up on the story that the flood wall just can’t handle another big one. Instead of seeking a solution, the blame game continues, lawyers shadow for coaching all company and city responses, and now the story of the prediction of a devastating flood is hitting the national media beyond local interests. That means a bevy of unanswerable questions and blame-gaming enough for everyone involved. There’s even an aside to the plot about a priest being transferred to another parish because he’s been too successful, while in reality his faith and the system under which he works are spiraling downwards faster than the anticipated flood.

By the time everyone stops arguing and agrees that emergency flood services are to be top priority, it seems it might just be too late! While at times the debating and nasty comments being flung to and fro loom large and last far too long, the shoe falls with a fuel explosion in the river and the dreaded storm arrives, everything turns to flood fight mode.

River Rising is an all too true tale, as we know from similar stories throughout the United States. It’s a cautionary piece of fiction, with realistic depictions that highlight the need to address beforehand the conflicts, lies, exaggerations, understatements, predictions, and underhanded business practices. The rebels are the true heroes herein! Read it before it happens to you!
Posted by Viviane Crystal at 12:34 PM No comments:

A Hellion In Her Bed by Sabrina Jeffries 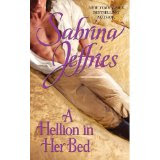 Lord Jarret Sharpe carries a literally grievous burden, his parents’ untimely, horrific deaths. He craves security and wants only to run the family brewery business. But his grandmother has sent him away to be educated, to grow up and not be a baby. But this Lord has an uncanny gift in winning at the card tables of school and later elsewhere. For nineteen years, this penchant has served him well, earning him respect up to now.

For it seems Granny has set her mind on marrying him to the “right” girl, and his desperation is now beginning to show at the game tables. Everyone knows that desperate men are losing gamblers! He finally gets her to agree to let him run the family brewery business without interference and rescinds her demand to control who he marries. So it seems he has gotten what he wanted, right? Ah, what was that gleam in Granny’s eyes all about as she assented to his terms for full control of his own life.

Annabelle Lake is not at all what Jarret thinks a woman should be – or could be! Entranced by her presence and totally disarmed by her wit, he begins the role of getting the upper hand – and more – which completely undoes the two of them. Attempting to restore some reason into their relationship, Annabelle poses a bet, after realizing that her own family brewery is in very deep trouble. Mismanagement and a secret have led to her to this daring challenge, one albeit with hotly imagined success, that proves to be initially unpleasant for Jarret.

But Jarret is not only sharp at cards and business but also at knowing when a change of cards and strategy is absolutely necessary. The process might not be that easy and Jarret has some dark family secret of his own to learn and deal with, one that makes him stronger in his new found goal. The ability to remain reasonably objective begins to melt away, leaving the reader with a thrilling, seductive, sexy and successful ending for this second “The Hellions of Hallstead Hall” series!
Posted by Viviane Crystal at 12:01 PM No comments:

Email ThisBlogThis!Share to TwitterShare to FacebookShare to Pinterest
Labels: A Hellion In Her Bed, romance fiction, Sabrina Jeffries

Getting There: A Novel by Gerry Boylan

For Luke Moore, hitchhiking starts out as a grand lark, another adventuresome chance that might land just about anywhere. A broken family and horrific tragedy in the very beginning of this adventure throws Luke into two states, one bordering on a frantic need to escape the pain of reality and the other a shadowed minuscule voice telling him to honor the promise he made to a fellow wayfarer now gone.
But that tale is preceded by the older, settled down Luke in his later years who is taking his daughter to college and picks up a hitchhiker. How can he tell his tale to this younger wanderer without glorifying the life and at the same time recommending a lifestyle that could threaten his treasured daughter’s life now she is no longer to be under the guidance and protection of her doting father and mother. So the tale begins.
In spite of being named after one of the four New Testament gospel authors, Luke develops a hunger for thrills, a “no-risk meter” way of moving through his world. Off he goes, thrilling to the beat of 1970s music, preached at by some well-intentioned nuns, a “one true love” experience, a drug event that made heaven and earth become one, and so much more. Luke manages to cross many states and meets a collection of characters one expects, with even wilder stories than his own to tell.
Redemption and reconciliation come in many forms. Luke is fortunate enough to find a lady who is steady, loving, and thrilling, a woman just similar and different enough to guide him through the end of his “lost soul” phase. Their turn to use what's been learned with friends and a long-lost father ends this novel on a realistic and moving note sure to touch the hearts of all readers.
Very nicely done, Gerry Boylan!
Posted by Viviane Crystal at 11:49 AM No comments: