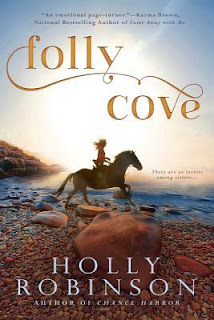 Folly Cove Inn, its owner Sarah Bradford, and her daughters, Laura, Anne and Elly, are famous in the Rockport, Massachusetts area and throughout the country.  The singular jazz singing, elegant meals, pristinely beautiful grounds, and the hosts’ friendliness to guests make the Inn a favorite vacation spot as well as a site for weddings and celebrations galore.  At one time, the three sisters were as close as possible, a support for each other against the persistent demands for perfection from their mother.  But now through a series of unexpected events, secrets galore are about to come out, facts and dreams that will shatter or unite their relationships forever!

Anne is the first to come home from her idyllic love and beach life far from Rockport.  Her perfect life has come undone, her love has left and she arrives home to shock Sarah with a baby girl.  She soon moves into a nearby cottage on the grounds as her mother doesn’t want a child’s noise to disturb the guests; she never realizes her coldness to her granddaughter just adds more hurt to Anne’s already dispirited mood.  But Anne’s feisty enough to fight for her daughter and agrees to help out at the inn to make money to support her daughter.

Laura is the daughter who stayed at home, married and had a child.  But something is unraveling in her marriage and she has no idea what it is.  She and Anne hate each other over a supposed betrayal that happened years earlier.  The truth of that terrible time will be clarified in time but not before words and even a physical attack brings all the venom to the surface.

Elly is a talented singer who just couldn’t make in the music business but developed other skills.  Her return home is guided by her need to recoup and see if she should move in a different direction.  She’s the beauty of the family which causes some resentment but her genial mood makes everyone around her laugh, smile and speak honestly about whatever is needed at the moment.

All of these ladies will gradually meet men secretly and in the open that will force them to face who they are individually and as a family. Those talks that follow are stunning. Even Sarah is about to undergo a transformation, albeit forced in one sense.

This is a family story that is so very, very real.  It has so many moments of different emotional ranges concerning dreams, betrayal and loyalty, sympathy, truth-telling, and a bond that is stronger than any one or series of events can destroy.

This reviewer loved this novel and highly recommends it as a careful, talented work of engaging contemporary fiction! Great story and characters every reader can identify with in some way or ways!

Posted by Viviane Crystal at 3:16 AM No comments:

The Candidate: A Newsmakers Novel by Lisa Wiehl 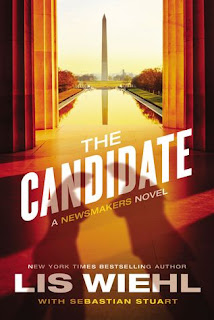 News anchorwoman Erica Sparks is at the top of her game with her snappy reporting that engages the public.  That is, she thought she was at the top but her boss calls her in to tell her that ratings for her show on GNN are slipping, a fact that restores her fears from the past and a life she wishes would never appear in memory.  Add to that she knows she’s neglecting her daughter Jennie for the job and they are beginning to drift apart.  The first problem will change and the second demands some immediate action but certainly not what Erica envisioned for their family.

Erica is covering the appearance of the candidates, Senator Mike Ortiz and Fred Buchanan, when a bomb rips through the crowd outside the venue for the appearance.  Fred and Judy Buchanan, among numerous others, are instantly killed.  But Erica is not only struck by the horrendous tragedy.  She notices that before Senator Mike Ortiz makes any comment, he seems to look at his wife, Celeste Pierce Ortiz, for approval before continuing.  Worse yet, he seems to smile at inappropriate times and otherwise has no affect regarding the circumstance that is tragic to say the least. As times goes by, including a personal interview with Ortiz, Erica begins to delve further into his background, believing something is very wrong with this man.
This then is the story of Erica’s tendency to be in the right place at the right (or wrong depending on one’s point of view) time and a powerful intuitive skill in being able to sniff out a potentially explosive story.

Add to that the too perfect image of Celeste Pierce Ortiz and her association with Lily Lau.  But readers will never be able to figure out what’s going on behind the scenes that has pathologically dangerous elements that Erica is investigating, actions that will put her own life at risk.

Add to that a choice Erika makes for her daughter will turn out to be very dangerous for Erika and Jenny.  Even the savviest of journalists can’t always be sharp about all looming dangers.

The Candidate: A Newsmakers Novel is a sharp novel about outside efforts to control the democratic process of elections in America.  Those plans are designed to change the American government and are all more frightening for the viable possibility that comes too close for comfort!  Fast, exciting, nerve wracking plot that provides a great read!  Superbly done, Lisa Wiehl and Sebastian Stuart!

Posted by Viviane Crystal at 3:07 AM No comments:

The Heavens May Fall by Allen Eskens 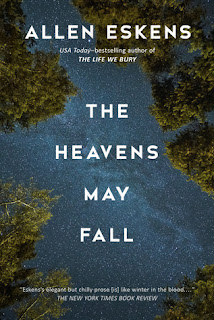 Two seasoned lawyers, Max Rupert and Boady Sanden, who are also friends face each other, one a prosecuting attorney accusing Ben Pruitt of murdering his wife, Jennavieve and the other one defending the accused.  Max lost his wife to a hit and run accident one year ago and his emotions are in full throttle on the one year anniversary of that devastating loss. Could this cloud his thinking about Ben’s guilt or innocence?  He thinks not but Boady is out for the objective truth.  Boady, on the other hand, carries the burden of a lost case, a loss he finds to be an unforgivable failure.  He has managed to move beyond that moment but it still looms large in the background and he’s determined it won’t mar the way he handles this case, as Ben is also a colleague and friend.  Boady enlists the support of a student, Lila Nash, who both learns from Boady and offers critically objective perspective when it is most needed.

Ben supposedly has a perfect alibi and yet a woman who lived across the street from his home claims she saw him in a red car outside his house on the night of the murder.  Max believes this is all the evidence he needs but Boady is not so sure.  Ben and Jennavieve supposedly had a perfect marriage, with its normal ups and downs, but could both of them have secrets that no one else has recognized until now?   Max is accused of ignoring other potential suspects and also receives a reprimand for taking home a file about his wife’s murder.  Since all other investigators consider that a closed case, Max sees no harm in reviewing the available evidence.

The gradual evolution of this murder investigation and trial will shock all readers as no one even hints at a clever manipulation of alibis that will affect both this case and connect to Max’s wife’s death as well.  Stunning, clever plot with a splendid depiction of how legal minds can manipulate cases to both protect and incriminate potential defendants.  Highly recommended, indeed!

Posted by Viviane Crystal at 3:00 AM No comments:

The Embroiderer by Kathryn Gauci For those who love a grand family saga, The Embroiderer will more than satisfy your love of the genre.  To begin with, we meet Dimitra, a strong, old-fashioned woman who raises strong daughters.  Dimitra’s past remains a secret until the very end of this novel but what is depicted before that astonishing finale is more than worth the wait!

Dimitra is the talented embroiderer, weaving together Turkish and Greek textile materials into designs that elicit awe in the beholder, all marked with a small, beautifully colored and crafted trademark flower.  While she encourages her daughters to be educated in languages and other subjects, she also allows them space to develop their own incredible talents.  One particular prophecy troubles her on and off until it become reality years later.

Dimitra’s daughter, Sophia, becomes a talented designer of high couture women’s clothing that is popular with both Greeks and Turks, a surprise given the deep animosity between those two peoples.  Indeed, this novel spans the historical time period of the Greek War for Independence against the Turks in in 1822 to the Balkan Wars and eventually World War II in Asia Minor, Europe, and elsewhere.

The men and women of this family and their supportive, loyal friends become friends forever, through the celebratory moments of joy as each woman succeeds all the way through the brutal scenes of each war.  In times of starvation and illness, the family saves so many in the Greek community who would otherwise have died but for the charity they received, given humbly but deliberately. To whom much is given, much is required, and this family never loses sight of that necessity.  It makes the victories seem that much sweeter!

Sophia’s daughter, Marie becomes first a famous opera and then cabaret singer and Nina becomes a scholarly quiet woman dedicated to her own love of art and history.  It is Nina’s daughter, Eleni, who is the narrator of this historical saga which sweeps the reader into its tapestry and holds it to the very last page.

Each woman will have true, passionate lovers and others unworthy of any loyalty and attention.  The reader through these scenes reads about such poignant scenes of suffering, endurance, unbelievable strength, and quiet but deadly resistance.  Even the servants are so totally engaged with this family that they literally are considered family.

There are betrayals as well, one in particular too horrendous to conceive but which will remain etched forever in readers’ minds and hearts.  But so too will be the sensational descriptions of luscious food, gorgeous jewelry and exciting clothing that are simply delightful to follow, both the familiar and the exotically strange.

All in all, The Embroiderer is a stunningly wonderful work of historical fiction and as the first novel of this new author a tribute to her immense skills of description and expression.  Highly recommended indeed!  Wonderful story and writing, Kathryn Gauci!

Posted by Viviane Crystal at 3:34 AM No comments: