The Embroiderer by Kathryn Gauci 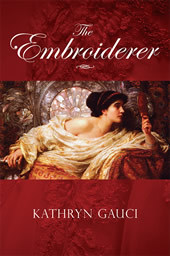 For those who love a grand family saga, The Embroiderer will more than satisfy your love of the genre.  To begin with, we meet Dimitra, a strong, old-fashioned woman who raises strong daughters.  Dimitra’s past remains a secret until the very end of this novel but what is depicted before that astonishing finale is more than worth the wait!

Dimitra is the talented embroiderer, weaving together Turkish and Greek textile materials into designs that elicit awe in the beholder, all marked with a small, beautifully colored and crafted trademark flower.  While she encourages her daughters to be educated in languages and other subjects, she also allows them space to develop their own incredible talents.  One particular prophecy troubles her on and off until it become reality years later.

Dimitra’s daughter, Sophia, becomes a talented designer of high couture women’s clothing that is popular with both Greeks and Turks, a surprise given the deep animosity between those two peoples.  Indeed, this novel spans the historical time period of the Greek War for Independence against the Turks in in 1822 to the Balkan Wars and eventually World War II in Asia Minor, Europe, and elsewhere.

The men and women of this family and their supportive, loyal friends become friends forever, through the celebratory moments of joy as each woman succeeds all the way through the brutal scenes of each war.  In times of starvation and illness, the family saves so many in the Greek community who would otherwise have died but for the charity they received, given humbly but deliberately. To whom much is given, much is required, and this family never loses sight of that necessity.  It makes the victories seem that much sweeter!

Sophia’s daughter, Marie becomes first a famous opera and then cabaret singer and Nina becomes a scholarly quiet woman dedicated to her own love of art and history.  It is Nina’s daughter, Eleni, who is the narrator of this historical saga which sweeps the reader into its tapestry and holds it to the very last page.

Each woman will have true, passionate lovers and others unworthy of any loyalty and attention.  The reader through these scenes reads about such poignant scenes of suffering, endurance, unbelievable strength, and quiet but deadly resistance.  Even the servants are so totally engaged with this family that they literally are considered family.

There are betrayals as well, one in particular too horrendous to conceive but which will remain etched forever in readers’ minds and hearts.  But so too will be the sensational descriptions of luscious food, gorgeous jewelry and exciting clothing that are simply delightful to follow, both the familiar and the exotically strange.

All in all, The Embroiderer is a stunningly wonderful work of historical fiction and as the first novel of this new author a tribute to her immense skills of description and expression.  Highly recommended indeed!  Wonderful story and writing, Kathryn Gauci!

Posted by Viviane Crystal at 3:34 AM