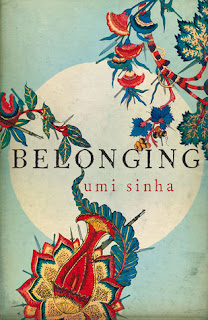 Belonging is a multi-generation saga narrated by Grandmother Cecil, her son Henry and his daughter Lila.  It’s the story whose Indian history parallels the love, cruelty and madness in its all too human characters.  For this family are all British outsiders, accepted as masters of their Indian subjects while in reality constantly waiting for the shoe to drop with revolution and rebellion.  Despite their position, the English narrators come to love this country with its lush vegetation, spicy and colorful food and dress, and the wisdom and care manifested through those who are soldiers, servants and nannies.

It takes a while to distinguish the different voices but we discover careful details of Cicely and Henry’s life in India while Lila is sent home to Sussex, England to live with her stern Aunt Mina.  All of these people have lost spouses or relatives to the occasionally erupting violence in India and the reader is intrigued by the fact that with so much surrounding hostility, the main characters deny the heightened volatility of the region and choose to believe they are well-loved.

The famous siege of Cawnpore took place in 1857 when the British subjects were promised safe passage and sanctuary but instead were all brutally raped, stabbed and murdered.  Cecily will intensely suffer during this horrendous event, but she leaves behind a series of letters describing their hopes and gradual realization of how they were maliciously betrayed.  All those years of politeness and acting like family and loyal soldiers in reality erupted into the fight for rebels and others who wanted freedom and independence, ironic to say the least since that wish would not be fulfilled for another fifty or so years.

The above sounds like a very simple plot, but this reviewer must emphasize the beautiful and skilled manner in which this story is crafted is beyond words.  Even the confusion over who is who and what events are being depicted may be seen to reflect the always confusing relationship between Indian soldiers and servants and their English masters and mistresses.  The descriptions are so artfully presented that one feels one is right there in the middle of it all and the same may be said for the thoughts and feelings swirling through each event and each character’s mind and heart.  For a first novel, Umi Simha has definitely displayed gifted skills in writing historical fiction.  Highly recommended, great reading!

Posted by Viviane Crystal at 12:02 PM