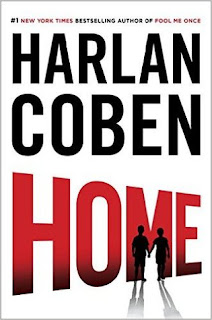 Two young boys, Patrick and Rhys, are kidnapped.  A ransom is demanded and met, but nothing is ever heard after that time.  The boys remain kidnapped.
Windsor Horne Lockwood III or Win as he is known herein is in London, having received a tip that Rhys, his cousin Brook’s son, has been spotted.  After spotting Rhys, Win is led to a seedy area of London where he is attacked but quickly and more than adequately takes out his three attackers but in the process loses the young teen he believes is Patrick, not Rhys.  He quickly alerts his buddy, Myron Bolitar, who comes to London to join the search.

Win and Myron enter the world of a crime lord who uses children and teens to further his business of prostitution, hacking, drugs and other devious jobs.  He’s also very savvy with communications, having cameras, voice hacking, and more to protect and further his business interests.  Feeling sad about their failure, they return to the United States and decide to revisit every step of this crime to see where it leads them.  This, then is the essence of the story that is even more thrilling than the blood, guts and gore scenes of their initial London discoveries.

The parents of Patrick and Rhys are obviously and understandably upset beyond words.  Patrick is found and is in terrible shape.  His mother is forever grateful but Rhys’s mother is furious that they lost her son and perhaps any chance at finding him.   After all, ten years is a long time and if he hasn’t been found in that time how will he be found now when almost every stone has been overturned to find him.

Readers will be shocked beyond words when the resolution of this case is finally realized.  It’s not the usual find the bad guys and rescue the missing!  Still, it’s worth the read to experience all the twists and turns involving Win, Myron,  Mickey (Myron’s nephew), the parents and others.  This reviewer hasn’t read any of the previous Myron Bolitar novels in the series but liked the tone of this novel more than the other Harlan Coben novels that I’ve read. This a crime novel/mystery that will satisfy all readers. Nicely crafted fiction replete with puzzles, violence, determination, betrayal, loyalty and sharp detective skills!

Posted by Viviane Crystal at 11:08 AM