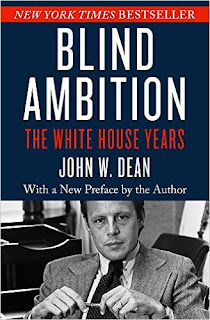 John Dean felt privileged on being invited to be Richard Nixon and the White House’s legal counsel.  Highly intelligent and skilled, Dean recognized that his main task was building a business in the White House and wrongly assumed he would have all the connections and advice necessary for the job.  He also realized he had spent so much of his life working, he had no meaningful relationships outside of that professional career, so he again wooed and married his old girlfriend, Mo.  It wasn’t long before his surrealistic, high-flying dreams began a slow, odious descent from legal counsel to firefighter, to fellow conspirator, to defender, to criminal and finally to prosecutor.  This then is Dean’s story of Watergate, the ultimate demise of Richard Nixon and many of his staff members who never learned the lesson that power has limits!

It all began with a break-in of a psychiatrist’s office to get the psychiatric records of Daniel Ellsberg to smear him and progressed to a larger break-in of the Democratic National Committee offices in the Watergate building in Washington, D.C. in June 1972.  Five men were arrested for the latter break-in and Dean clearly describes the White House interference trying to get these men freed and paid hush money.  It didn’t help that the men were carrying a large amount of cash ultimately found to be connected to the Committee for the Re-election of the President (Nixon).   The remainder of the story concerns the cover-up attempted by Nixon’s henchmen: Haldeman, Ehrlichman, Mitchell, Colson, Strachan, Mardian and others.  What made it ten times worse is that everyone was caught in lying about the event, about the money used to hush testimony, about the use of pivotal figures quickly followed by their being discarded, and numerous hours and money spent in trying to deny the truth and basically save butts.

At first Dean’s job seemed to be what he calls being a “firefighter,” putting out the truth before it burst into the public scene via media.  As one reads these pages, it’s hard to deal with the mix of feelings of feeling sorry for these misguided men and then getting angry at the relentless justice that pursues them for their clear, untrammeled guilt.  Dean portrays Richard Nixon as the wily, devious manipulator who plays dumb but is playing each of the characters toward his own end of being acknowledged as innocence.  But he failed to realize that his Presidential staff would slowly unravel in fear of being indicted and eventually jailed; after each implodes, devastating testimony is given that is both convicting and self-serving, including for certain time spans Dean’s own reporting.  While these men were prosecuted and served time in jail, except for Nixon who was forced to resign the Presidency, the truth has been spoken despite attempts at distorting, denying and placing blaming elsewhere.

Blind Ambition: The White House Years is vital reading for a nation concerned with the abuse of power and the checks and balances systems of government that are intended to stop events like Watergate from happening and/or being kept hidden.  Power has boundaries! Highly recommended reading!

Posted by Viviane Crystal at 4:24 PM No comments:

The Con Man of Lagos: A Novel of Espionage by Francesca Salerno 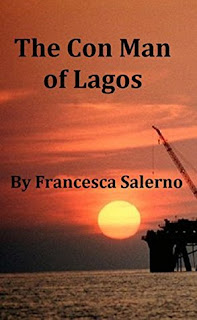 Francesca Salerno’s second espionage novel takes the reader through the realities of terrorism in the world of Boko Haram, a small but dangerous group affiliated with Al Qaeda.  Boko Haram is located in Africa, and the plot in Lagos involves a Soviet submarine loaded with nuclear tipped missiles that explodes in the waters around Lagos and the surrounding area.  It also concerns their plan to take barrels of sludge-like chemicals siphoned off barrels of gasoline and explode them in an area guaranteed to kill many Nigerians.  Although Nigeria financially prospers from the sale of gas and oil to nations around the world, the terrorists believe Nigeria is a superior country that should gain most the benefits of the gold mine to the world.

There is very little action in this novel.  However, the essence of its appeal lies in the knowledge of its characters and the expanded knowledge accumulated through the political, military, business and ambassadorial connections.  This is a very different style for an espionage novel but one that works well herein.  You will meet upper officials of Nigeria’s petroleum business, an ambassador from America who is really a CIA operative, an Imam whose connections make him able to make huge amounts of money and use that money for terrorist purposes, a shady employee who carries out the plans of the Imam but who fails to realize the plot involving a far greater risk until it is too late, a Pakistani ambassador who works for the glory of his country although his job in Lagos is a demotion for getting too cozy with the Americans, and more men and women who are astute chess pieces in a game that’s headed for a showdown between the King and Queen.

Another notable feature of this novel is the characters whose idealism and dedication to the betterment of Nigerian interests supersedes the financial greed or fundamentalist spiritual fanaticism threatening the permanent demise of Nigeria and other global powers.  It’s also fascinating to follow the motivations and changing plans of these characters as they coalesce and vie with each other.  Sometimes in the real world, volatile terrorism is thwarted, actually more times than is obvious from the news we view or read every day.  Francesca Salerno has obviously researched her topic well and been to the setting she so aptly describes.  The Con Man of Lagos… is a good read that is recommended for those who like to learn more about this imaginary but all too realistic terror plot!

Posted by Viviane Crystal at 3:11 AM No comments: