Secrets of a Charmed Life: A Novel by Susan Meissner 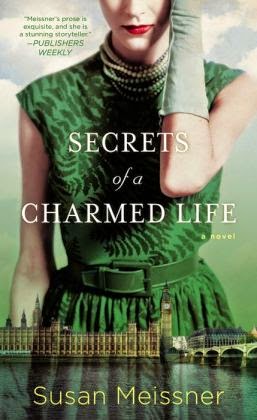 “You said wishing something doesn’t make it come true. Doing it does. Someday I hope you will be proud of me.”  These words were penned by Isabel MacFarland many years ago and which she is now sharing in an interview with American scholar Kendra Van Zant.  While Kendra pictures a perfect world where everything works out for the better, what she hears from Isabel is anything but perfect.  This is the story of choices made out of a determination to shape one’s own destiny, choices that call for desperate decisions affecting more than one’s own future.

Emma dreams of creating bridal dresses.  Her persistence leads to her first job as a seamstress for the owner of a bridal shop.  When Emma shows her own designs to the owner of the shop, Mrs. Crofton hires her immediately and says she may have a connection to help Emma meet with a designer who might be interested in these gorgeous bridal designs.  WWII, however, interferes and Emma and her sister Isabelle are forced as children to be evacuated to the British countryside for safety from the German bombs falling on London and other British cities on a daily basis.  At least that’s what they are told even though the bombings are as yet infrequent.  Emma has no support from her mother; in fact her mother acts as if she resents Emma because giving birth to her meant the end of her mother’s own dreams of a promising future.

So begins a harrowing story in which Emma returns to London to explore an opportunity.  An act of sisterly betrayal followed by the most intense bombing imaginable causes Emma and Julia to be separated for years.  During those years, Emma will discover the secret behind her real father’s identity, will fall in love and lose it just as quickly.  Years later Emma will receive a letter from her sister that makes Emma realize the stark reality of that choice made so long ago.  In that time Emma has fashioned a completely new identity as well as a very successful business.

Secrets of A Charmed Life: A Novel is title that belies the mystery, danger, and passion behind the quest for a career creating beauty for that one special day in a woman’s life, her wedding!  The catastrophic events of the London Blitz combined with a dysfunctional family reeling from previous mistakes make for riveting reading!  Highly recommended historical fiction!

Posted by Viviane Crystal at 6:46 PM No comments:

Crash and Burn: A Novel by Lisa Gardner 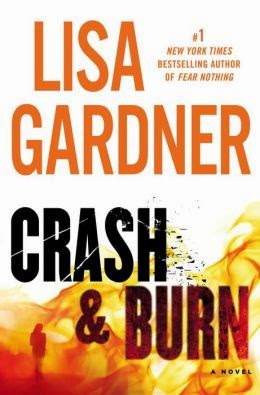 “Where is Vero?” repeats Nicole Frank immediately after a devastatingly brutal car crash in which her SUV landed upright with the front of the car vertically dug in the dirt at the bottom of a deep hill off a main road.  Despite phenomenal injuries, she manages to crawl out of the back of the SUV and up the hill to look for her daughter and get help.  She then blacks out and doesn’t wake up until she’s in the hospital.  Her quiet husband, Thomas, is sitting next to her bed, looking as he’s been through a tornado.  Later Nicole hears him telling the doctor that this is her third concussion in the last year and that she was very sick even before the setback of this horrific accident.  For some reason, that statement makes Nicole furious!

The cause of her TBI or traumatic brain injury is never initially explained except to say she kept blacking out and falling.  Meanwhile, she keeps calling for Vero, so much so that the local police set up teams, including tracking canines, to find a girl who they estimate must be between nine and thirteen years old.  It’s a search that’s in the wrong place for the wrong reasons but no one realizes that until much, much later in the story. Some have doubts about Nicole who had been found reeking of very expensive whiskey, in spite of the fact that her blood alcohol level wasn’t in the criminal zone.  However, she is guilty of driving when she was medically advised not to do so and so may be charged with criminal charges related to DWI.

The story begins to spin faster and faster as a team composed of Sgt. Wyatt Foster and his girlfriend/patrol woman Tessa Leoni, begin to put the broken pieces together of this strange occurrence.  At first they suspect Nicole’s husband, Thomas, of perhaps abusing her but then other characters enter the picture, in the guise of supportive, loving care for Nicole.  The bottom line is someone wants Nicole dead but who and why?
Crash and Burn: A Novel is a great thriller and the reader will never in a million years be able to put the pieces together before Nicole, Thomas, Wyatt and Tessa.  It’s a psychological novel as well as we get to read about Nicole’s thoughts and feelings as her memories very, very slowly return, eventually one significant memory that holds the key to her obsession with “Vero.”  Traumatic brain injury, indeed, has more than one meaning and a potent one at that! Crash and Burn… is a story of passionate, unconditional love that can endure the worst that can happen.  That love teaches Wyatt and Tessa something deep about what really matters and how they can handle their future together.  Nicole and Tom as well must learn to trust again, despite having seen something so, so terrible it could scar her forever!  Grand job, Lisa Gardner – love your novels!!!!

Posted by Viviane Crystal at 6:38 PM No comments: