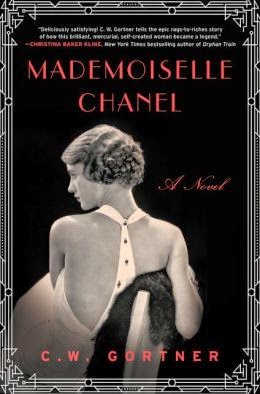 Famous artists frequently refuse to be defined, classified, or placed in society’s tidy box of approval.  Coco Chanel, renowned designer of classic clothing, accessories and perfume, is an enigmatic delight as depicted in this novel by perceptive and sensitive historical novelist, C. W. Gortner.

Gabrielle’s parents are deeply in love but her paternal grandmother rejects Gabrielle’s mother.  Her mother in turn loves her daughter but says she is unable to live with her.  So searching and yearning for love followed by rejection seems to be a pattern that Gabrielle will follow until she meets the true love of her love, Arthur Capel or “Boy,” a relationship that is treasured because with it comes respect and treatment as an equal, competent professional woman.  The latter trait is not one encouraged in pre-WWII France but Gabrielle’s relationships yield financial and emotional freedom on her own terms.

Thus begins an astonishing career in which Gabrielle begins her first shop where she is allowed to design everything but dresses.  Her styles, like the change in her name, jettison her into fame as a designer who isn’t afraid to risk her business for what she believes.  Cocoa often stated that women should dress elegantly, simply, sleekly, with some low-keyed jewelry or scarf accessories.  These were memorialized in the Chanel black suit, the sexy but simple black dress, and the famous Chanel No. 5 perfume that has solidly sold from its creation to the present.

Coco’s career conflicts and troubles are intimately described herein, some of which she handled with creative ideas and some which she lost and mourned.  Competition was fierce and even some of her own colleagues and workers tried to bring about her demise, literally by law and figuratively through slander.

Although Coco was judged and demeaned as a Nazi collaborator, Gortner depicts her connection to the Nazi’s with a higher purpose and mysterious misunderstanding in covert circumstances that force the reader to suspend judgment.  The artist manages a comeback even after years of exile in Switzerland.


While other writers have published their own books about Coco Chanel, C. W. Gortner has written a masterful portrait that is engaging and intriguing on every page celebrating Chanel’s intelligent, creative and beautiful clothing.  This reader was truly sad at the ending of this novel, an ending that mourns the passing of a passionate, brilliant, talented and incomparable woman.  Delightful historical fiction and so, so highly recommended!
Posted by Viviane Crystal at 9:27 PM 1 comment: 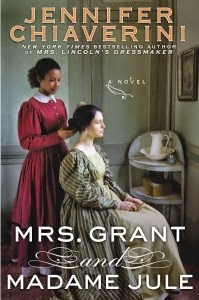 Julia Grant and her slave Jule vowed to let nothing separate them.  Both were blinded with their fondness for each other and staunchly declared their parents’ and peers’ warnings to be incorrect.   Time, however, changes so many things.  Julie falls in love with Ulysses S. Grant and is astonished at his family’s vociferous condemnation of slavery.  She naively believes that will change in time.  She never examines the condition of slaves, thinking that Julie has a good home, doesn’t work that hard and has a bond with Julia that other slaves lack.

As the Civil War looms closer and closer, Ulysses is rising in the United States Army and travels constantly. Many of his strategies are described geographically and the reader grasps the tension accompanying each movement, win or loss. However, Julia is always allowed to accompany him, living in homes close to where he is stationed.  Jule begins to remain back at the Julia’s parents’, home and she falls in love with a slave who is an ardent freedom lover, determined to escape from his cruel bondage.  It is he who opens Jule’s eyes to the opportunities that escape would often.  A strangeness grows between Julia and Jule, but Julia fails to grasp the root of the change.

Julia’s story evolves as her husband gains more glory and honor during the War and she meets famous Washington politicians and their spouses, including the temperamental Mrs. Lincoln whose fiery rampages confuse and frighten Julia.  The love between Ulysses and Julia is depicted as very special and very deep, nothing being allowed to separate them, including the jealous slandering that occurs with every successful battle.  When he is accused of being brutal in war, he simply states that war demands certain actions to not only guarantee success but to assert the principles that were a consequence of the South attempting to divide the United States.  History indeed tells the story from the point of view of the victor.

Due to Julia’s eye problems, Jule had been the eyes and ears of Mrs. Grant for years.  The problems with the lack of vision parallel her blindness to the approaching end of slavery, including Jule’s eventual escape and success as an accomplished hairdresser. Jule’s husband’s future is shocking but definitely real and no tribute to slave owners.  The reader awaits some kind of compromise and reunion between Julia and Jule, but reality instead deems that “happily ever after” scenario to be symbolic of the deep divisions that rule during and after the War.

Jennifer Chiaverini has once again crafted a novel that brooks no denial of the sufferings of the war, the harshness of slavery, the dreams and aspirations of slaves, the sacrifices demanded of the Grants.  Those who live in the path of the war suffer as well and at times the mercy of the Grants is seen in their response to the requests of widows and families of the “enemy.”  Mrs. Grant and Madame Jule is fine historical fiction that is sincere, intriguing, adventurous and passionate on every page. Well-written and researched, this reviewer highly recommends this novel for those who love accurate and suspenseful historical fiction!

Posted by Viviane Crystal at 8:48 PM No comments: