From the Ashes by Jeremy Burns 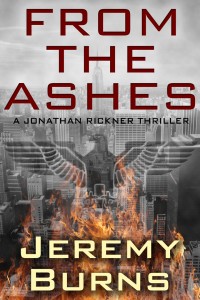 From the Ashes. Jeremy Burns. The Fiction Studio - E-Book. January 2012. 403 pages. 628 KB.
Jonathan Rickner and his brother are very close but have not spoken frequently to each other because Michael Rickner has specialized in American history and Jon European history and when this novel opens, Australian. Michael says he has something to share with Jon, a something Michael never gets to tell because he is found dead in his apartment, although the crime has been written off by the police as a suicide! Which is it? Jon races back to Washington D.C. in shock and mind-numbing grief. The greater shock occurs when he hears from Michael's fiance and sees evidence that now leads him to believe Michael was murdered!
To say more would be a spoiler. But the mystery that slowly begins to emerge has to do with the relationship between German and America before the beginning of WWII, one that could shatter those who tell American history from a particular point of view. It's also one that a secret organization is racing to hide by finding and destroying the ultimate paper documents that would prove this to be fact rather than fiction. The Division will stop at nothing and will use any and all available persons to achieve their end!
But the plot goes awry when the head of the Division is faced with a terminal illness and one of the specially trained agents of the Division begins to "think" and "feel" about what his part is in this secret group who have more power than anyone could conceive.
How will what seems a straight-forward, simple plot be resolved? Fortunately, the simple becomes a complex, amazing plot that is fiction but could all too well be actual reality.
Jeremy Burns is a true espionage writer who knows when to ramp up the action and when to insert some provocative description in a well-balanced tapestry of historical, adventure-packed fiction. Well done, indeed, Jeremy Burns!
Posted by Viviane Crystal at 7:04 PM