Thoreau on Wolf Hill: A Henry David Thoreau Mystery by B. B. Oak. 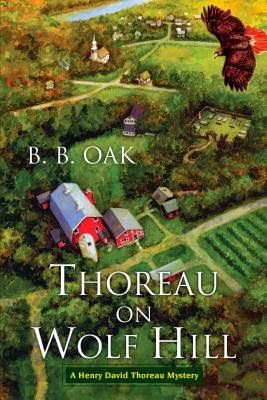 Vampyres, as they are spelled in this novel, or vampires are very, very real, according to believers like Solomon Whitty; and the key to ridding society of these terrifying creatures lies in chopping out their hearts and more separation of parts of their dead or living bodies, along with some other noxious deeds that are considered mandatory action to end the cycle of murder and violence.

Henry David Thoreau and Dr. Adam Walker are the voices of sanity attempting to discover the murderer of several members of this small Massachusetts town.  But the superstition, driven by irrational fear, looms larger than reason.  The ensuing solutions to this dilemma, exacerbated by the scourge of an epidemic of “galloping consumption, include more violence.

Add to the mix the fact that Dr. Adam Walker and Julia are doing everything to avoid each other and to be with each other.  For there’s a mystery as to why Julia ran away to France years ago, believing she could never marry the love of her life, Adam.  Here is another mystery waiting to unfold for the reader, along with the unknown reason of why she abandoned her husband in France to resettle in Plumford.  Add another mystery about a small boy with a harelip and a woman who agrees to be Julia’s housekeeper but has some devious ways involving the young boy, Noah to the mix!
B. B. Oak crafts a multilayered mystery that is unpredictable and intriguing, as well as rather ghoulish in several scenes.  The plot thickens without any break and the reader will be enthralled in this story with complex conflicts paralleling the ancient Indian stories of vampires and supernatural powers.  It’s almost ironic that so much horror can riddle this area of New England known for its charming beauty.

Highly recommended mystery that makes the reader want to read the other Thoreau mysteries!

Posted by Viviane Crystal at 7:09 PM