The Organ Takers: A Novel of Surgical Suspense by Richard Van Anderson 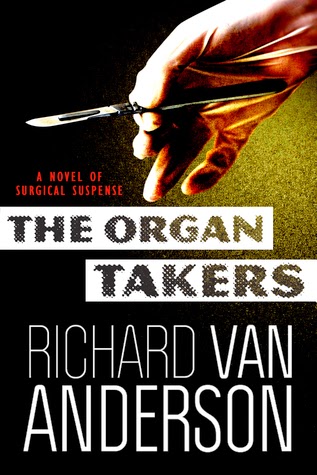 David McBride lost his medical license because of remaining silent about an ethical violation; his silence was deemed to be innocent in one sense but complicit in another.  So now he works as a lab tech, doing surgery on animals for a wretched salary.  His wife has been supportive but she’s beginning to lose patience as David mopes about his error and the loss of his surgical career which he loved, was very good at and which provided him with dreams and plans of a brilliant future.  Add to that the minuscule apartment in a low-class neighborhood and his wife’s announcement of pregnancy and the reader gets the full picture of a distraught couple on the brink of disaster. Then after numerous rejections to reenter medical school and the surgical profession, David gets not one but two offers that will bring financial success and allow him to work again in the field of surgery! The problem is one’s legal and the other one is illegal! The problem one has a caveat of perfect performance and the other a caveat of bribery that could ruin David McBride forever!
David makes a choice that involves performing organ harvests in a surgical suite set up in a ramshackle warehouse in downtown New York.  It supposedly is only for a few months but it turns out to be far worse.  It also turns out that the donors are not willing participants.  So the story begins to spin out of control until David knows he must do something drastic, no matter the cost to his own future.  That choice results in what could be catastrophic consequences to his physical and mental well-being! Or it could be that he is the weapon wreaking revenge for all he lost!

The Organ Takers is exactly what it says in its title – a novel of unbridled surgical suspense that will keep the reader up all night, unable to stop reading this very real criminal and/or medical thriller.  Richard Van Anderson knows exactly where to ramp up the intensity and tone it down so the reader doesn’t come down with a stress-related physical problem.  The black market for organ donations is probably a very real debacle hidden away from the public eye.  Van Anderson raises the issue, demanding why this very noble, life-saving surgical procedure, involving various organs vital for life depends on how much money one can afford to spend to literally “live.’

Yes, most of us personally know or know about someone whose life was saved by an organ transplant or about someone who voluntarily gave life to another human being because of a sacrifice of an organ like the heart, the lung, kidney or other necessary part of the physical body.  The Organ Taker… reminds the reader how control and regulation needs this issue to stop becoming a “rich man’s salvation” and possible for anyone and everyone, with no strings attached.  It also deals with the ethical abuses motivated by greed for money that may exist in far too many places. Superb story that raises as many questions as it answers, Richard Van Anderson!

Posted by Viviane Crystal at 5:56 AM