The Life We Bury: A Novel by Allen Eskens 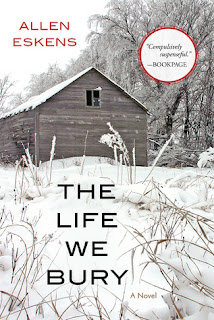 Joe Talbot, college student, has his hands full.  His mother is an alcoholic who is probably bipolar and his brother is autistic and being forced to undergo too much change for his vulnerable psyche.  Joe’s got an English assignment in which he must interview a subject and write a biography, including beginning chapters, an outline, and a finale.  He chooses Carl Iverson, a man convicted of raping and murdering a teenage girl, Crystal Hagen.  As his interviews begin, he meets several people who will change the course of his interview into an investigation.  Those people are Lili, a neighbor in his apartment building; Virgil who served with Carl in Vietnam and a former law clerk who was present during the trial of Carl.

The first question to be answered is why Carl pressed for an early and quick trial.  And why is he desiring this “dying declaration” when he’s previously been silent on the whole matter?

It’s almost ironic that Joe is incapable of using some tough love on his own mother who has no problem taking Joe’s last monies to pay her bail rather than get sober while he becomes insistent on following the course of his investigation to its completion for a man who a few weeks ago was a stranger.

Readers will be shocked by the turns in this plot as accounts from Vietnam and a diary, as well as detailed questions completely turn this case around.  The course of this tale puts Joe’s safety into a perilous scene indeed.

Readers need to hold judgment as the beginning of this novel seems to tie up a story into a seamless tale.  The best is yet to come, and Allen Eskens provides an riveting tale that is sure to please readers who love good criminal fiction/thriller novels.  Nicely crafted and highly recommended!

Posted by Viviane Crystal at 7:15 PM