The Future She Left Behind: A Novel by Marin Thomas 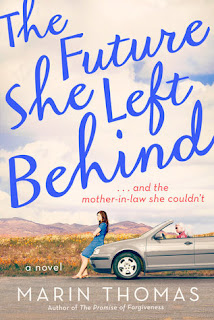 Katelyn Pratt’s life moves from sedate satisfaction into a whirlwind question mark when her husband, after twenty years of marriage, has divorce papers served on Katelyn.  He’s found a new, young love and left his wife with his mother, who is probably the most annoying woman in the world of St. Louis.  Shirley Pratt is a snob who is constantly mocking or correcting her daughter-in-law.  But her husband has decided the house will go up for sale and his mother will move into a senior apartment complex that Shirley decides isn’t ready yet for the way she wants it.  Result: she has to stay with her daughter-in-law until the apartment is ready.  Katelyn decides to take a trip back to her hometown in Little Springs, Texas.  The only problem is that Shirley has to go with her because her son is too busy with his new girlfriend.

This is the crux of this funny but frustrating novel.  However, Shirley is about to meet her match with Katelyn’s mother, Birdie.  Although Birdie gave up her dreams, like Katelyn did, she’s no shrinking violet.  She puts up with Shirley’s comments to a point but then is an expert at shifting the topic.  At the same time, Katelyn meets an old love, Jack, and other events happen to make her take a long look at what works and what doesn’t work in a good life.

This is a novel about transformation, leaving behind loneliness and embracing the fact that connections with other people is not fraught with fear and rejection. Instead Katelyn and Shirley will evolve with new experiences and reflection on attitudes and errors from the past.

Despite the frustration, this is a delightful story that this reader found very enjoyable and recommends as a contemporary, very real story that speaks to families anywhere in the world!
Posted by Viviane Crystal at 7:23 PM