The Gybford Affair: The Heiress and The Fortune Hunter by Jen Black 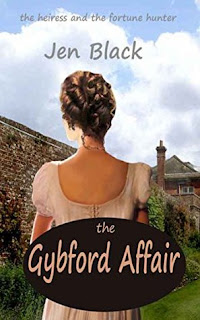 Frances or Lady Rathmere is a widowed heiress spending some quiet time enjoying the warm, fragrant weather when a horseman comes tearing across her pathway and on the barking of her dog Gyp is thrown into the nearby River Derwent.  After rescuing him, Frances is appalled at the way he berates her for allowing the dog to run wild.  She quickly disavows his accusation and declares he is at fault for riding over private land, an uncomfortable fact he simply chooses to ignore he heard.  All in all, their meeting doesn’t bode well for any future relationship.

Jack, 4th Marquess of Streatham has turned hard of heart in grief over losing his beloved Elizabeth and being thrown off his horse and hitting his head on a stone hasn’t helped his mood much.  Frances is quick to rebuke his cold comments and they part with no desire to see each other again.  But such separation is not meant to be as they meet at a social gathering where he attempts to apologize.  But their laid-aside animosity is cast aside as a puzzle threatens to mar the pristine reputation Frances holds in the area.  Someone is publishing letters in the local newspaper that hint at her improper and immoral behavior.  At the same time a newly appearing soldier, Holbrook, appears and Frances catches him trying to force himself on a young woman and later much more harmful behavior.

The remainder of the story concerns increasing letters to the editor hinting at Frances and Jack’s relationship, a duel, an attempted kidnapping and more adventurous events.  While the plot’s complexity will unravel, the beauty of this novel concerns the gradual transformation of Frances and Jack as both carry wounds from the past that are more of an obstacle to their growing closeness and misunderstandings.

Jen Black has crafted another winner that is fast-paced, intriguing and humorous in many scenes.  While some of the characters are stereotypical in nature, the main characters have very human qualities that are shaped by the past but not irrevocably stuck in them.  Feisty, enigmatic, devious, independent and sweet characters unite to shape a very nice read!  Nicely done, Jen Black!

Posted by Viviane Crystal at 10:52 AM