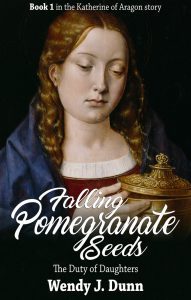 Catalina, a/k/a Catherine of Aragon, is a child being reared in the Court of her parents, King Ferdinand of Aragon and Queen Isabella of Spain.  Beatriz is Catalina’s tutor who narrates this poignant story of children who must learn to respectfully accept both homely joys and devastating tragedies.  They must do this with dignity and aplomb, no matter how grievous the events that are honestly not fit for children’s awareness.

In an age when women are educated to marry and raise children, the royal children, Catalina and Marie, are educated as men are.  Catalina flourishes in this environment, having a natural and exciting curiosity about literature, philosophy, science, and other subjects.  She is being prepped to be the future Queen of England, expected to separate from her Spanish family forever, and to be loyal to England, a huge task that will hopefully unite both countries. Wendy Dunn does a fine, fine job of conveying the essence of Catalina and Isabella’s world in which woman must appear to be obedient and self-effacing to their husbands but in reality wielding royal power that shapes the destiny of one’s kingdom.  Subtlety is the art being taught through listening, observing, and commenting on her mother’s rule.

A secret mystery suggests King Ferdinand’s complicity in the death of the husband of one of Catalina’s siblings.  Beatriz herself is accosted by the King several times which fills her with fear that will not be cast aside for many years.  Several siblings of Catalina will die, causing such grief that it brings some to near-madness.  In the effort to banish the Moors from Spain, Beatriz, Catalina and her siblings are forced to view in person the most devastating and horrifying aspects of actual warfare. The conflict between the Catholic faith that exhorts brotherly love and yet murders the infidel enemy causes intense consternation in Catalina’s mind, heart and soul.

Royal children are political pawns as their children must choose foreign spouses and political expediency over happiness.  If love occurs, so be it; if not, one may perhaps learn to love.  The loss of real love is mourned but then quickly pushed to the side for political strategies.  It’s a relevant reality that makes the reader why a certain hardness pervades royal personalities.  The reader is left to judge but of necessity accept as brutal reality that keeps nations united and safe.

While the events of history generate intense interest, it is the multi-dimensional characterization within this novel that is so intriguing and enchants the reader on every page.  It’s also a window into the world of this woman who would become such a formidable and beloved Queen in England years hence!

Posted by Viviane Crystal at 11:06 AM