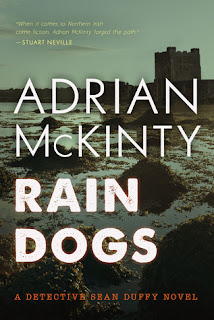 Sean Duffy has nothing going right these days.  He’s just been dumped by his girlfriend, Beth, who is ten years younger than he is.  He’s just been assigned to the protective unit for a Muhammed Ali visit to Ireland.

The story takes place in Carrickfergus which is close to Belfast.  It’s the time of the Irish Troubles when the IRA is dropping bombs left and right as a protest method to gain Irish independence.  It’s a bit of a far stretch to imagine how these bombs could be an asset in their goal but for now it is what it is.  So for now Detectives like Duffy check under their cars for bombs every time they set out to travel somewhere.  Ali during his tour actually turns around and confronts protestors, winning them over with his charm and panache.

But the day isn’t done before there are two problems, one minor and one major.  A Finnish delegation has come to the area to check it out as a potential site for a large new business and of course the town officials want and English government want everything to proceed ultra-smoothly.  However, one of the Finnish delegation member’s wallet is declared missing and a young woman is found dead from a possible suicide in Carrickfergus Castle. The first is a joke; the second turns out to be a complex mystery.  Why did this young journalist kill herself?  Why did the night guard not know she was still in the Castle after closing hours?

The plot becomes quite complex when it turns out that the Finnish delegation was not as innocent as it appeared to the public.  Add to that another policeman is killed from a bomb under the car and of course everyone assumes it’s just another IRA plot, nothing new.  It turns out that’s not so either.

Duffy for a long time keeps receiving false leads but if it’s one thing Duffy has a reputation for, it’s persistence, relentless.

Rain Dogs… has many other twists and turns that keep the reader flipping the pages and rapidly reading.  This is my first Sean Duffy mystery, and I am looking forward to read the other novels in which he is the sleuth solving crimes in tumultuous Ireland!  Very nicely done, Adrian McKinty and recommended reading for all who love a good mystery!

Posted by Viviane Crystal at 5:32 PM