The Summer Before the War: A Novel by Helen Simonson 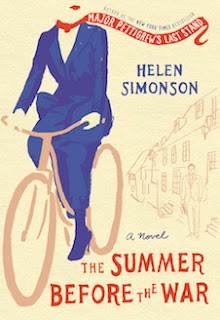 
Rye, East Sussex, is a lovely, quiet English town in 1914.  Beatrice Nash arrives to teach Latin at a small local school.  That wouldn’t shock anyone in contemporary times but it was highly unusual for a woman to teach, especially Latin. But Beatrice is being sponsored by a locally highbrow lady, Agatha Kent, a leader of the community who is of course always vying with other women for authority in all community affairs.


Beatrice is desperate for this job as her academic father died, leaving her with no money.  But Beatrice’s got grit and peddles around on her bicycle, loving the country air and believing she can make a difference in the lives of the poor children she will be instructing.  It’s a huge charity move but her presence could make all the difference in the world for one or two lads with intelligence.  The rest of the community, however, doesn’t see past their own ego-inflated goodness in sponsoring this school.


The reader is just starting to get to know the people of Rye well.  Their beliefs are quite stringent, against anything that smacks of modernity like feminism, homosexuality, pregnancy of unwed mothers, and moving out of one’s class.  One of two brothers, Dan and Hugh, is increasingly attracted to Beatrice.  The one brother Hugh is submerged in his future career of medicine, and the other brother Dan is a poet who wonders what his future holds. Such a blasé attitude to life is about to undergo a shocking shift as World War I looms in the near horizon.


The remainder of the novel concerns how these village residents with petty concerns are brought up short by the war and quickly are stripped of their pride to do their part for the war.  There are more shocks to come, a little romance, and tenderness within each connection to grip the reader until the very last page.


The Summer Before the War… is lovely historical fiction which this reviewer highly recommends.

Posted by Viviane Crystal at 5:41 PM

Email ThisBlogThis!Share to TwitterShare to FacebookShare to Pinterest
Labels: Helen Simonson, historical fiction, The Summer Before the War - A Novel, WWI fiction