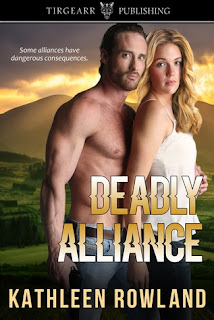 Amy Kintyre has a chance to design her own clothes, has interviewed with someone to carry her label but needs time to finish her full presentation.  So she’s planning on quitting her taxi cab job and applies as a bookkeeper for Finbar Donahue, ex-Army Ranger.  Amy’s not in the hunt for a date these days as she’s got enough on her plate; but when she meets with Finn, all bets are off and it’s instant hot zone trying to tone down.  It won’t be long until both are doing the same and more.

Finn’s got a huge problem, however.  His partner has been killed but it seems his partner or someone else was siphoning funds out of the business.  It’s not so easy to track which makes it all smell like some very shady money laundering. So Finn’s asked for some police help and the case becomes a larger nightmare when it appears that the local Irish Mafia is tangled up with some ISIS fundraisers assisted by some ragtag Mexican hoods.  When Finn’s account is frozen, all hell breaks out!

Deadly Alliance is a crime thriller and serious hot and heavy romance novel.  Rowland’s plot is complex enough to keep the reader engaged with wondering how it will all end. At the same time, the sparks are flying between Finn and Amy and Finn’s former skittishness around women appears to be undergoing a very gradual transformation.  Amy, a woman who knows her own mind and has no need for a dependent relationship, is a feisty character who may ramp up Finn’s testosterone but knows how to cool his fiery temper and Army Ranger force that doesn’t want to wait for someone else to handle what he clearly sees is family betrayal.

Posted by Viviane Crystal at 7:04 PM