Swimming Between World by Elaine Orr 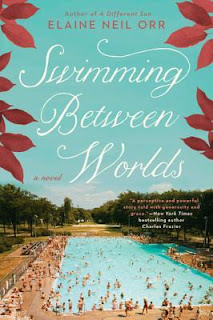 Tacker is an engineering student who graduated and went to work with a notable engineering firm in Nigeria, Africa.  A man who fully embraces every thing he did and does, he wound up being fired and sent back to America.  His fault?  Getting too close to the native Nigerians, embracing their culture, innocently embracing religious and other rituals, and supposedly consorting in a physical relationship with a Nigerian.  Shades of Jim Crow extending its tentacles overseas.  Tacker comes back to his home town, embarrassed, confused and even angry about his failed career.  His family really don’t know what happened but stand by Tacker and eventually offer him management of the family’s small grocery store in Winston-Salem, North Carolina.

While working, Tacker meets Kate Monroe, a gal is who recovering from the death of her parents and who then discovers the momentous secret of her parents’ marriage that shocks her to bits.  The trauma is so deep and harsh that she is not sure she can ever trust anyone again, and that includes Tacker who seems to have his own secrets.

The plot picks up with the entrance of an African-American, Gaines Townson.  He is accepted to work at the grocery store where he does his best to work hard and remain unnoticed.  But Gaines is part of the new wage of rebellion, willing to risk arrest and even death for trying to break the Jim Crow laws.  Tacker actually accompanies him on one of these potentially volatile scenes in which Gaines dares to sit at a whites-only luncheon counter.  On and on these scenarios progress with eventual success but also accompanied by violence and death.

How to these characters develop?  One could call this a coming-of-age novel but the characters are only coming of age with the recognition and ownership of vital truths about humans and how they treat each other.  It’s all about love, hate, loyalty and betrayal.  It’s an American historical novel which leaves as many questions as answers in the reader’s mind.

Posted by Viviane Crystal at 5:22 PM