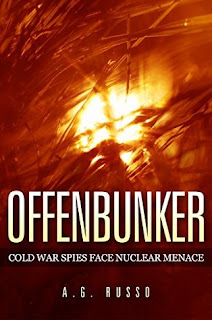 Many of us who lived in the Cold War era remember the years of 1960 and 1961 when America and Russia were engaged in a hot-button contest, threatening the detonation of a nuclear bomb.  Families took protective measures which one could debate would be totally ineffective should such a devastating attack take place.  But few knew about Offenbunker which was a carefully built underground shelter designed to protect the President, Vice-President, Senators, etc. in the event of a nuclear disaster.  While this shelter is being finished, there are spies trying to discover where the bunker is and stay one step ahead of those preparing to attack our nation.

The novel begins with revelation that the spies now operating in divided East and West Berlin are alive and well, that is all of them except our CIA spies who keep getting killed.  Yes, there’s a mole in the house and part of this plot is to discover who it is.  Unfortunately, not all who serve our government have pure motives (no newsflash there).  The fight for promotion is often depicted as a dividing factor among men and women who should be cooperating and not waiting to stab the next person in the back.

Now one of these characters is assigned to be in charge of security in the bunker deep in the Blue Ridge Mountains of Virginia.  Quite a bit of historical information is dumped in between the chapters which some may find annoying but which are actually highly relevant to the plot and intensity of the time.  The atmosphere of these times is perfectly conveyed when every second counted and could be the difference between life and death for millions of Americans.

Oh, by the way, the bunker also holds a nuclear missile to be launched the minute American government officials realize a Russian missile is on its way.

The characters herein are very realistic, albeit somewhat stereotypical.  You will find yourself heartily disliking one in particular and anxiously awaiting his demise.

Posted by Viviane Crystal at 3:02 AM