Peregrine Island: A Novel by Diane B. Saxton 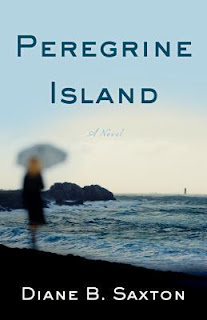 Three women inhabit a home on Peregrine Island, a small town on the Connecticut side of the Long Island Sound.  The grandmother Winter, daughter Elsie and granddaughter Peda live together but firmly divided by their likes and dislikes, their secrets and their refusal to talk directly about the family history that has divided them, without each realizing that reality.  Winter sits every day staring at a painting she deems beautiful, full of characters who mean more to her than her own family.  Elsie had disappeared for five years and returned with her daughter Peda, never giving one utterance of her reasons for disappearing or a clue about who her daughter’s father is.  An old caretaker and a hidden old man whom others believe is Peda’s invention add mystery and ghost-like ambiance to this lush setting and bittersweet family. Many secrets will become exposed and unraveled depicting how the past so forcefully colors the present.

One day two bedraggled old men and a young, sexy-looking man, Ham, arrive at the house, claiming they’ve been sent by well-known art dealers.  They are here to evaluate the painting Winter loves, created by her grandfather, Simon Candor.  Winter, a woman who fluctuates between biting direct remarks and being a surrealistic presence, wants to know how these strange men learned about the painting.  Ham claims he is a relative of Simon Candor and that the painting really belongs to him. The family is protective in the face of unending questions and comments; the art evaluators seem greedy and ready to do something for their own benefit.  Is the painting real or a copy?  Are the evaluators really experts or frauds?

To say more would be to spoil a delicious tale of revelation and conflict that flows like the tide of the waters surrounding this island home.  Over quite a period of time, we will learn not only who created the painting and what lies behind its frame, but the mystery of a family member who disappeared years ago, the truth about a murder that was never documented, and the truth about present and past relationships that is shocking to all.  Truth and honesty will eventually come out but not until the end of a circuitous journey that exposes loyalty, greed, unfaithfulness, selfishness and terror in every single character abiding in these pages.

Peregrine Island… is a carefully plotted and uniquely characterized story that is sure to delight readers of skilled authors.  Highly recommended historical/contemporary fiction!!!

Posted by Viviane Crystal at 6:35 PM