But This is Different by Mary Walker Baron 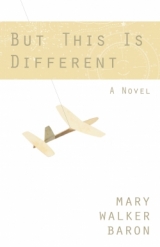 Imagine waiting forty years on an isolated Pacific island, waiting for a special someone to fulfill her part of an agreement made so long ago it's almost beyond memory. Such is the life Mere, our main character, is living. It's an existence filled with constant pain and mourning that hasn't lessened with the years. Mere's only comforts are an old, crippled man and watchful woman who cherish Mere as the "Star of the Sea" of this New Guinea island! Others serve Mere and gladly run at her beck and call as if she were the treasure she is perceived to be! The woman who brought her here is revered as a goddess, even in her strange mournful absence!

Every year a mysterious box of gifts arrives on the last day of the year. It's a ritual celebrated on Mere's island almost as a religious rite but one that increases the mystical point of view of the islanders who have guarded Mere's pact for secrecy all these years. They teach her that the highest appreciation of life is to simply and lovingly "be!"

But that other woman now sends a letter in which she states she is dying and wishes Mere to return to New York to be with her beloved in her last days. Here is the journey of an older, dedicated friend who is not always mentally fit but endears all whom she meets on the journey. Inadvertently, she will wind up living as a homeless person who is briefly committed to a mental institution before ending up with her former lover.

But This Is Different is a literate, uniquely crafted novel that is absolutely mesmerizing. Secrets abound and aren't quickly revealed until the reader absorbs the complete personality of the main character which is intellectual, spiritual, and most of all deeply and lovingly emotional. Inner pain is an aching world unto itself. Committment and promises carry a depth far beyond the original words spoken and literally change one's world! The revelation of these two characters is quite stunning!

What else can one say about this beautiful, exquisite novel? Buy it, read it, and love it as much as this reviewer is sure you will! Absolutely outstanding!!!
Posted by Viviane Crystal at 5:11 AM

Email ThisBlogThis!Share to TwitterShare to FacebookShare to Pinterest
Labels: But This is Different, contemporary fiction, historical fiction, Mary Walker Baron