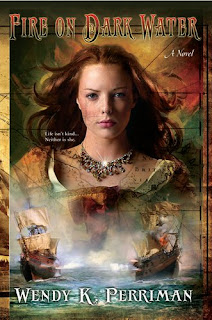 Blackbeard the Pirate’s notorious deeds are famously portrayed in books and movies. Here, however, we learn about this adventurer through the voice of his thirteenth wife, known as Lolamura, Lola, London Lola, The Gypsy, or just plain Doxy. Deflowered at the age of ten in 1702, Lola spends the next ten years learning the art of begging, pick-pocketing, etc. in London, England because she cannot return to her gypsy family in her impure state. After being caught stealing, Lola is sentenced to being transported to America for seven years.

Lola’s journey to the New World is dangerous, tempestuous, and exhilarating. Then her adventures with her employers in the South range educate her about social status, medicine, and a slew of outrageous conflicts life-threatening for all involved. Lola inadvertently winds up abetting horrific events from which she must escape, next to the West India island of Nassau, this time with a hooker friend, Violet.

Here the action noticeably picks up as they meet with a surprising former acquaintance, all eventually vying for men with means. “Perhaps it’s the raw excitement of loving so close to the edge, that point where the dare fires the blood with thrill…Anyhow – the higher the rank the better the plunder – as all potential queens are well aware.”

And finally Lola meets Captain Edward Teach, the notorious Blackbeard, “the charmer (charismatic, seductive, learned and cultured…” and Blackbeard the pirate (cruel, brittle rapacious, and evil…”. Lola weds him, and the following pages recount in detail his various victories and his eventual downfall. Fire on Dark Water is a fascinating, riveting, cruel and sometimes kind tale of a notorious thief and his multi-talented, lustful, and savvy but temporary, thirteenth wife.

Posted by Viviane Crystal at 8:45 AM