The Great Pretenders by Laura Kalpakian 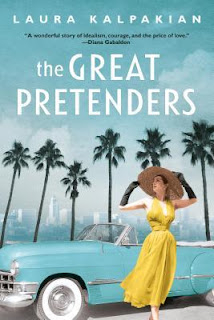 Roxanne Granville is a spoiled, rich granddaughter of a theatre and movie powerhouse.  Her mother dies in the very beginning of the story and her resentment of her grandfather’s lover is beyond words.  She can’t understand how Denise could replace Julia because Roxanne really has no idea what a love affair with commitment is and how it could change.  Therefore, she announces she will have nothing to do with him until he drops Denise.  His response is laughable, a fairy tale in the land of the rich!

So what does a woman with fame to her name do when not living in a beach home in Malibu?  She has no real skills but isn’t shy on ideas.  She decides to be a book agent, supporting and selling the types of books that are turned into shows and movies.  Roxanne proceeds to do something daring, something that carries the chances for amazing success as well as the chances of looming disaster.

Hundreds of former writers and actors were fired when Joe McCarthy’s Committee for Unamerican Activities was conducting its investigations and congressional testimonials, rooting out anyone and everyone even slightly associated with the Communist Party.  Those who refused to admit involvement with Communism or who refused to name other people involved pleaded the Fifth Amendment.  The results were tragic and devastating!

Now Roxanne, who deeply feels for these talented but now unemployable writers, begins to sponsor their written works under the names of anonymous, unknown writers.  Anyone with half a brain knows this but stays silent; Roxanne is admired for her guts and/or stupidity in proceeding with this plan.  Will it work out for all involved?

Then Roxanne goes one step ahead with trouble and falls in love with an African-American guy, Terrence Dexter during a time when Martin Luther King and Rosa Parks are protesting openly about the Jim Crow laws in vogue.  Roxanne grows up fast when she sees in Terrence how black people live with daily prejudice, laws and abuse based on racial discrimination.

In the end of this fictional account, one may say that differences between characters reach a semi-satisfactory resolution but definitely not the solution all are hoping to attain.  Roxanne comes across as a spunky, daring woman but her cleverness remains hidden below the surface.  Only when life’s circumstances become beyond her control does the reader begin to appreciate Roxanne’s true life-changing stamina in many notable ways.

The Great Pretenders is a remarkable story describing turbulent historical times and how these difficulties were met by Hollywood and feisty, challenging characters!  Good read!!!

Posted by Viviane Crystal at 3:13 AM