The Editor by Steven Rowley 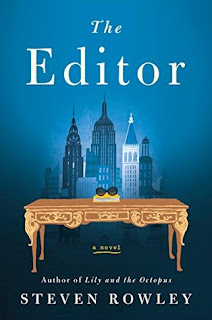 Francis is an insecure stereotypical new writer who has written and just sold his first novel.  He has been assigned an editor at Doubleday, the publishing firm that just bought his novel.  What he does with that editor will determine whether his novel is published or lays dormant.  What follows is an oh so normal but poignant story, a gift in James’s life.

Imagine the surprise when James meets Jacqueline Kennedy Onassis or “Mrs. Onassis” as she invites him to call her.  Down-to-earth, practical and inspiring, she leads James to rewrite the end of his novel which both know is incomplete.  This involves James having to explore the depths of his relationship with his mother and father.  The family is known for skirting around important issues, replacing truth with sarcasm and edgy humor.

While this is occurring, Mrs. Onassis invites James to her summer home where they explore the title Ithaca, its meaning and the journey that is yet to be finished.  They share meals, drinks and funny moments.  Jacquie treasures her privacy and never goes beyond snippets about her past, all of which are poignant reminders of what she has endured.  The reader picks up her implications that she just wanted to be normal and not a continuous fixture of American fascination.  However, since that is a fantasy, she does what she can to maintain a regular life as an editor (of fourteen years).  Her fascination and admiration for his novel lies in the recognition “as familiar truth, but also as wisdom you’re hearing voiced in a new and articulate way.”

Francis’s lover, Daniel, seems oddly less supportive of Francis’ efforts but does the best he can.  Mark, an assistant of Mrs. Onassis, is helpful but also one step short of coming onto Francis.  Who is Francis?  A man aching to be seen in truth by his family and lover.

There are poignant secrets that gradually are revealed which dramatically change the writer’s life with his mother and help him to recognize and admire her truth as a person.  It’s described as an erupting volcano, a healing end to his finally finished story.

The ending of this novel, in which readers fall in love with James, his family and Jacquie, is so sad as he honors the marvelous journey he has made with the loving support of his friend and editor.

Posted by Viviane Crystal at 4:07 PM