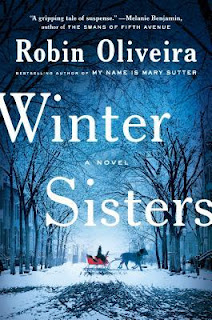 Albany, New York, 1879.  David and Bonnie O’Donnell walk to work after their children, Emma and Claire, leave for school.  It’s an ordinary February morning with light snow in the air, and Bonnie reminds David they have a dinner to attend at the Sutter-Still home.  As the morning progresses, a fierce wind and heavy snow becomes a catastrophic blizzard to the point where no one can see a foot in front of their direction.  Tragedy follows!

David and Bonnie die in the blizzard, but Emma and Claire literally disappear.  A massive search conducted by Dr. Mary (Sutter) and Dr. William Still, whose endeavor fails to produce even the slightest inkling of where the girls could be.   Meanwhile, the story briefly switches to a highly skilled musician, Elizabeth Fall, whose passion for music very quickly becomes intense dislike in Paris, France where she has been under the mentorship of a supposed Master violinist.  When she learns of the blizzard disaster, she immediately leaves for America.

The missing girls are eventually found but their story becomes a source of division, suspicion and a trial in which prosecutors seem out to destroy their account and attempt to destroy Dr. Mary Sutter, who takes care of prostitutes, an unseemly use of her medical skills in the late 1800s that immediately mandates social stigma.

The beauty of this book involves the integrity of caring people who pursue justice for all in the face of formidable opposition.  Those who are rich or possess political power are trusted for all the wrong reasons which will eventually be exposed.

Emma and Claire begin the process of PTSD from their phenomenal experience.  Bonnie O’Donnell’s last words to Emma were to take care of her sister, and the only positive outcome for her is she can clearly say that she honored this promise to her mother.

Winter Sisters: A Novel is a fine mystery and carefully crafted story which keeps the reader fully engaged.  It’s also a satire of injustice and cruelty which can make or break a person and at the least leaves shades of vulnerability that can be overcome.  Highly recommended historical fiction!

Posted by Viviane Crystal at 7:44 AM