The Splendor Before the Dark: A Novel of the Emperor Nero by Margaret George 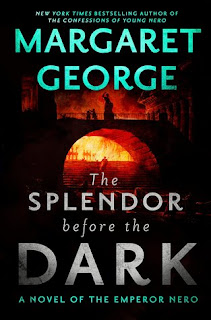 The Splendor Before the Dark: A Novel of the Emperor Nero. Margaret George. Penguin Publishing Group. Copyright 2018. pb. 592 pp.; ISBN: 9780399584619.
Passion takes precedence over politics, at least initially, in Margaret George’s brilliant follow-up novel to The Confessions of Young Nero.  The story begins with the infamous fire that destroyed almost all of Rome, a fire Nero helps to put out.  He helps dig out victims and console those who lost everything.  However, the rumors then begin that Nero himself set the fires.  He does nothing until he realizes that unless he finds a scapegoat his reign will end.  And so the Christians become the easy targets because their teachings are used as evidence of their guilt.


Nero after staging the massacre of the Christians for public viewing sets about rebuilding Rome.  He intends to have Rome display glory and stunning, exotic views that will be admired forever!  He attempts to wow his audience with his poetry, his athleticism in the chariot games, his artistic and architectural designs, and all of this (and more) are gorgeously depicted by the author.  The effect on the reader is spellbinding.  Not only is the history of Nero’s world explored but it also envelops the reader into the culture and beauty of the gods and former Roman and Greek emperors.
Then deceit and tragedy enter Nero’s world, beginning with an absolutely huge defection on the part of both Senators and Nero’s own military guard.  The plans for assassination are discovered and the plotters are condemned! But the moral and emotional devastation on Nero is piteous to follow.  His pure intentions to create a beautiful cultured world within Rome are totally misconstrued and that shatters him.  He will never trust again!
The loss of his wife lead him to abandon Rome for a year while he travels to Greece where he will participate in the Olympics of the time.  Finally, Nero’s demise follows the mysterious prophecy that began his adult life.
Words cannot possibly convey the depth of how much is covered in this stunningly beautiful and skilled novel.  Forget what you thought you knew about Nero and enjoy this comprehensive, complex journey into the world of one of the most notable Emperors in Roman history!  Well-written, engaging, well-researched and highly recommended historical fiction!

Posted by Viviane Crystal at 7:09 PM

Email ThisBlogThis!Share to TwitterShare to FacebookShare to Pinterest
Labels: architecture, historical fiction, Margaret George, mystery, religion, romance, The Splendor Before the Dark - A Novel of the Emperor Nero, theater