Beautiful Invention: A Novel of Hedy Lamarr by Margaret Porter 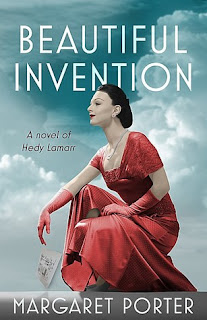 “I enjoy drawing up plans and designing and making things…They don’t realize that Hedy Lamarr is an invention.”  Yes, Hedy Lamarr was a beautiful actress but also an intelligent woman who invented a war weapon that was almost used to defeat the Germans in WWII.

Born Hedy Kiesler, an Austrian, Jewish woman, she aspired to be a wonderful actress, but the films she chose to act in first was Ecstasy.  Hedy appears naked and fakes an orgasm which equally gained her universal praise and scorn in the earlier years of the 20th Century.

She marries a German munitions dealer who soon becomes her jailor.  She winds up escaping from him after realizing she couldn’t ignore her yearning to become a full-time actress.  Hedy signed a contract with Louis Mayer after much haggling but seems frustrated by not being given films she feels are equal to her acting abilities.  Still, her looks and talents catapult her to fame and stardom status!  Her love life is certainly interesting if not very stable.

Margaret Porter gives a deft depiction of the lives of actors and actresses who more frequently “use” each other for better scripts or positions in the middle of a turbulent time of history with the rise of Adolph Hitler and the beginning of WWII.  Hedy moves through six marriages and has several children, including one adopted son.  She is also an avid gardener and inventor.  She generously contributes her time for the war by selling bonds and attending clubs to sign autographs and dance with soldiers and sailors on leave.

She researches science facts to create the torpedo that can attack without being detected.  The work behind this creation is no small feat and highly complex.  Hedy herself is a complex character, always searching for deeper meaning and creation, never satisfied.   Her private and public life parallel the historical and political turmoil of Europe and America – dramatic and life-changing!

Enjoy the scenes where Hedy stuns observers with her appearances in elegant gowns and hats, once an actress, always an actress!  Yet also relish the brilliance of her thinking as she seeks solitude to do research and create a soda machine and later a war weapon to be used against Germany.  Most of all, just revel in the enigmatic and intelligent talent of one of the most famous actresses in the Gilded Age of American Theater!  Highly recommended!

Posted by Viviane Crystal at 7:32 AM