The Washington Decree: A Novel by Jussi Adler-Olsen 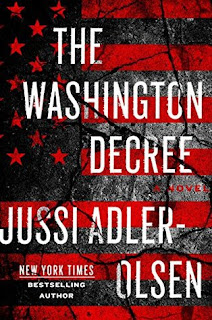 The Washington Decree: A Novel. Jussi Adler-Olsen. Penguin Publishing Group. Copyright 2018. pb. 592 pp.; ISBN: 9781524742522.
When chaos and breakdown create a domestic crisis, the President, Cabinet, Senate and House of Representatives are designed to handle every situation.  However, the scenario that shakes America within the pages of this novel defies the order, law and protocols set up for such a situation.

The story begins sixteen years before Senator Bruce Jansen becomes President.  After winning a geographical contest, Doggie or Dorothy Rogers and a fellow contestant, Wesley Barefoot, and some other contestants win a free trip to China.  The days in China are filled with a lifetime of wondrous memories which are suddenly destroyed by an attack which winds up with the murder of Senator Jansen’s wife.  Years later, when Jansen has been elected President, he agrees to appear at an event in the hotel owned by Doggie’s father, Bud Curtis.  During that major event, President Jansen’s pregnant wife is assassinated, and the killer and Bud Curtis are arrested.  Bud Curtis is convicted and sentenced to Death Row.

But here is where the horror begins.  President Jansen has been unhinged by the deaths of his two wives, evidenced by the draconian measures he institutes, supported by a small cadre of powerful politicians.  All ammunition for guns of any kind must be surrendered.  The press is now to be censored by the government.  All TV shows about violence are removed.  In fact, most TV channels are closed if not censored for every soundbite that they transmit.  The National Guard and eventually all military are called to serve within America only as the rising tide of revolt, protest and violence increases.  Violent deaths, rapes, beatings and arrests are the new order of the day! America seems to be a civil war against itself.

The remainder of the novel centers on how several characters, mainly Doggie and some of her former colleagues, realize that the preceding events were not just caused by previous acts of violence but perhaps deliberately programmed so that someone could wind up with complete control of the government and the people of the United States of America!  Anarchy, however, still cannot be suppressed!

The Washington Decree… is a novel that could very well become reality.  The division in contemporary America certainly could foster such an attempt to wrest control from such divisive controls.  The author plots out the conflict deftly! Readers know it will evolve into a solution, but the tension is aptly placed so one is not quite so sure about the outcome!  In an epilogue, the author states that institutions such as FEMA, the Office of Homeland Security, and others might be unable to quell the consequences of such a scenario.  Jussi Adler-Olsen keeps the reader engaged but more than that makes the reader ask significant questions about the state of American democracy under threat!  Good contemporary thriller read!

Posted by Viviane Crystal at 7:01 PM