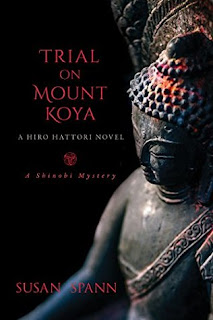 November 1565.  The nation of Japan is divided as daimyos vie for victory over each other for the position of Shogun.  Oba Nobunaga has spies everywhere and Samurai Hiro Hattori is traveling with his friend, Portuguese priest Father Mateo, to Shingon Buddhist Temple on Mount Koya.  His mission is to deliver a message to an agent from Hiro’s home town of Iga.  However, Ringa the agent never gets to deliver any message as he is murdered that same day. So begin a series of murders that Hiro and Father Mateo are asked to solve.

All the reader knows is that the first four deaths, as they gradually occur on different days, are unusual.  The victim of each monk is posed as one of the Buddhist Judges of the dead in the afterlife, a judgment that progresses over a period of time.  The description of each Judge and the way the victims are posed in death is fearful and awesome!

The reader gets to focus on two different areas in this mystery story.  One focuses on elements of Shingon Buddhism, one of many sects of Buddhism, and one which obviously has political connections, a common aspect of 16th Century Buddhism. The other is the divided nature of the resident monks of Mount Koya.  Some have samurai backgrounds, some poor backgrounds, some thwarted ambitions, some holding unresolved issues and all who try to maintain a life of prayer and meditation when outside matters are not encroaching on their peaceful way of existence.  They also hold a prideful sense of arrogance in stating multiple times that the depth of Shingon Buddhism is beyond Hiro and Father Mateo’s miniscule understanding.

One might hope no further deaths will ensue but that is not the case.  The reader expects Hiro and Father Mateo to solve the mystery of so many deaths and how he does that makes the remainder of the novel fascinating and exciting.  There are some interesting and even humorous scenes involving some woman monks and a child who is a bit of a mystery as well as the adults in the novel.

Susan Spann is a highly skilled writer who knows exactly where to place tension, complexity, simplicity, levity and seriousness in a very successful work of historical mystery fiction!

Posted by Viviane Crystal at 3:12 AM