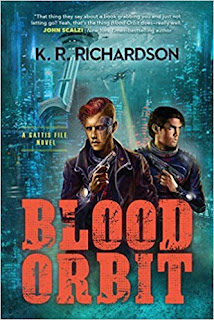 Rookie Eric Matheson and his mate discover a gruesome, mind-blowing massacre of sixteen victims.  His mate is injured and Matheson is assigned to investigate the murders with the Chief Forensic Officer, Inspector J. P. Dillal.  Dillal is the first cybernetic investigator in the corporate-run planet of Gattis.  But Dilall has origins from a despised ethnic underclass in a caste system that not only feeds dislike but also guarantees outbreaks of violence.  The murders occurred in what is called a jassi, a place where illegal activities flourish and bonds among the criminal elements of society develop in spite of the clandestine nature of these jassi meetings.  Matheson and Dilall are charged with solving the murders quickly with hints that failure to speedily conclude this matter could have devastating results for both men. At the same time, Dilall is new to this cybernetic life and there are some adjustments that need to happen in order for him to avoid infection and death to his new mechanical being.

Dillal is glad he has a rookie for a colleague in this investigation so that he can train him in techniques that actually work, before the rookie Matheson is tainted by the local police who are supposed to enforce the law but instead pursue the interests of Corporate goals and greed.  Matheson’s peers however, resent his promotion to this job and violently let him know it.  Add to that the groups on the street who support and more often oppose him finding the answers about this murder.  The reality is that corporate office is trying to cover up the truth so they can name one of the lower-class groups as guilty, thereby justifying some elaborate methods of exterminating the despised lower class or classes of Gattis.

To say more would spoil the conflict’s evolution; suffice to say Dillal and Matheson will solve the crime but may not live to enjoy the victory!

This sci-fi novel is very difficult to follow, but it’s worth it to break through the challenging group names, acts by superiors to confuse and alter the progress of the investigation, and determine who are the ones directing Corporation commands.  Interesting read and recommended for true sci-fi fans!

Posted by Viviane Crystal at 4:31 PM