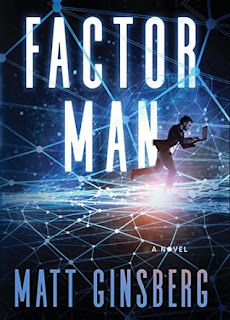 Factor Man is a computer genius who has calculated the solution to innumerable mathematical problems with one system, the one that is called “God’s Algorithm,” the one that makes problems like artificial intelligence child’s play.  It’s a simple plot, really, but one that keeps the readers flipping the pages because it’s so engaging.  In the beginning, there’s a great deal of explanation in computer and mathematical jargon that might be disconcerting to some but it soon becomes as clear as possible and the reader is hooked!

First, Factor Man invites various blog watchers to submit a number to which he offers a mathematical solution.  That is all very amusing until the hunt begins.  William Burkett, a journalist, sees the possibilities of a potential Pulitzer Prize if he can figure out who Factor Man is and whether he’s for real or a “crackpot.”
Then we have two opposing sides vying to discover Factor Man’s real identity with the hope of controlling or stopping him.  One is the FBI and the other is a Chinese special agent named Janet Liu.  The system Factor Man has devised is one that could solve the problems of hacking into business and governmental programs, solving scientific problems such as which proteins and chemical compounds could cure cancer, and on and on.  As the complexity of possibilities increases, the search for Factor Man becomes more frustrating and tense.  Factor Man is a cool customer who plans carefully but at the same time acknowledges he’s no genius with “spy” behavior.  Meanwhile, he is making a fortune and decides to share his information with those he thinks deserve to treat it with socially conscious programs.  It’s nice to read about such altruistic motives, even though it’s in fiction.

Factor Man is an unusual work of science fiction or computer fiction that is quite different from what’s on the current best seller and even unknown market.  There’s a hint of reality that someday this might just be the future of computers, finance and government.  Nicely done, Matt Ginsberg.

Posted by Viviane Crystal at 7:02 PM