Ring of Fire - A Pike Logan Thriller #11 by Brad Taylor 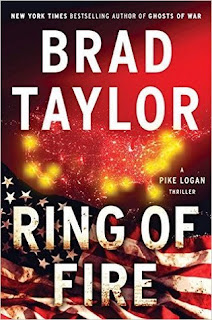 Dexter Worthington made an agreement to become a successful defense contractor. That agreement was secretly linked to Saudi Arabia who was indirectly linked to the horrendous act of 911.  Now part of the “Panama Papers” have been leaked to the public showing how many businesses and individuals have been linked with various terrorist acts committed by ISIS and other like-minded terrorist groups.

Now Pike Logan’s Taskforce is assigned the job of stopping a second leakage because the next leaks may reveal the work of the Taskforce which is a group approved by the President of the United States and the Oversight Council, the Board of Directors of the Taskforce but cannot be found anywhere in print within government records.  However, in seeking to prevent another leak, a far greater and devastating plan is revealed.

A group of Saudis is planning to finish what they believe was never perfectly carried out on 911.  The plane that should have crashed into a significant target such as the White House, Camp David or a nuclear facility, instead crashed into a field in Pennsylvania due to the bravery of the passengers who attacked the on-board terrorists and died for their efforts.  Now the Saudis are looking for a completion of that task through a plan known as The Ring of Fire, a series of attacks on the ports of America and one final explosion of a dirty or nuclear bomb that will render life unlivable wherever it explodes!

This then is what the Taskforce is attempting to discover and stop.  The action is intense and nonstop.  The machinations of the terrorists are for most of the novel always one step ahead of the Taskforce. The Taskforce members are highly skilled, perceptive investigators – the best in their field of work!  A couple of side conversations keep this maze-like journey from becoming monotonous.  One involves a woman being “selected” for the Taskforce and what that entails, including some dialogue that reveals prejudices of tried and true male members of the force.  The other involves dialogue between an Arab and one of the Taskforce members in which myths and truths are thrown at each other, revealing how prejudice grows through misinformation and how generalizing costs lives.

All in all, there’s enough violence and excitement in this eleventh Pike Logan thriller to satisfy every fan of thriller, adventure, international crime, terrorism fiction.  An enjoyable, fast-paced, somewhat long and unpredictable but exciting thriller!

Posted by Viviane Crystal at 11:09 AM