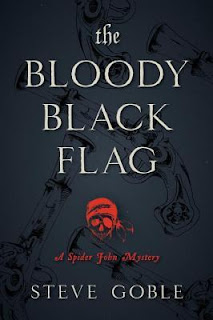 What child has read a book about pirates or seen pirate movies and imagined living such an adventurous, constantly thrilling life.  Well, that hunger can be sated again with Steve Goble’s novel about Spider John, a man who feels safer as a pirate at sea than a landlubber always having to watch his back for fear of the hangman or jailkeeper because of past deeds.  The time is 1722 and the place is the Colonial Coast of America.  Spider John and his good friend, Ezra, have escaped capture ashore and are now part of the crew of the Plymouth Dream, with a captain who would not think twice about killing any crew member if his rules are broken.

Early on, a young, bitter looking “bloke” keeps eying Ezra and it turns out he believes Ezra is the descendant of witches and therefore to be burned at the stake or hanged.  This is an area of Massachusetts still carrying shadows of the earlier “witches” frenzy that wound up with rash charges made and confirmed, followed by death.  Imagine Spider John’s devastation when Ezra is found dead in his room.

Spider John is determined to find the murderer, but in between his investigation steps are battles to be fought against attackers of their ship.  These are the swashbuckling battles that are expected by the reader and do not fail to satisfy with their minute descriptions of hand-to-hand combat as well as sword-fighting duels that are life and death matters.

There is no law on a pirate ship and Spider John has no intention of capturing Ezra’s killer but instead will kill him.  Surprises aplenty will thrill the reader as this search continues!  Nicely done and hopefully the first of many more Spider John stories to follow!

Posted by Viviane Crystal at 6:24 PM